When I first met him, the sweet natured french man  shook my hand so hard it rattled me and we rambled on about modern french films, how acupuncture saved my life, and how shitty the weather was.  He was charming and nice and very very much in love. His partner was chatty and sweet and they seemed a good, if slightly unlikely match. We were not close friends but would say hello when ever we ran into each other in the tiny microcosm of the world that is the Pacific Northwest. 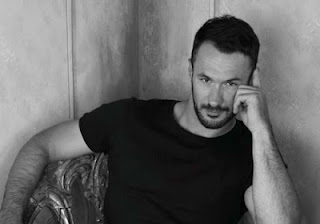 The last time I saw him was over Pride , I was busy racing about  doing things with my band and he walked past gave me a brief squeeze on the shoulder and disappeared shirtlessly into the sea of other buff shirtless men folk .  That's how these things go.

When I met him he introduced himself using his real name, never mentioning his past fame as Wilfried Knight.  Of course I knew who he was, how could I not in modern queer culture. It didn't matter to me one way or the other. To me Wilfried was the lovely guy I chatted with whenever we ran into each other and occasionally online when I couldn't sleep.  I remember discussing my going to France to work, and dumb topical events. He regaled me with a few amusing stories from his porn days and I swapped mine from my art film misadventures.  Late last night I learned of his passing and of Jerry's. I was heartbroken.

Details soon emerged and Wilfrieds blog reads now like a suicide manifesto.  Jerry hung himself two weeks ago leaving Wilfried a bottle of pills and a bottle of wine, which he took eventually, in the hotel where they were married seven years ago.  Wilfried wrote online defending Jerry, as so many hurtful things were being said of him in the wake of his suicide., the most heart wrenching  words I've read in sometime  “a last proof of love: he goes the hard way (who wants to die hanging?) and leave me the easy road.”

Well it's a response to a repulsed reaction I've had to the coverage. You lost the guy you jerked off to, I lost someone I talked to.  And neither of us matter. Both men have families, and close friends. They were in love and their loss and struggle consumed them both. This is tragedy. These two people just wanted to be together as a married couple, and live their lives like anyone else.

I work with a lot of them and am friends with many more. It's a job, in an industry- a multi-bilion dollar one. I don't think of it much differently than I do professional athletes personally. I think they do unfortunately represent a black mirror of our own faults and fears . Our vanity, shame and body dysmorphia. But we project these fantasies on to these people who are just messed up guys and gals just like the rest of us. We all need someone to love us, we could all benefit from stability and recognition and maybe just a little less judgment from others.

I'm saddened by the news. I'm saddened by loss and grief and angry at the loss. I'm angry at the light flickering out again and again in life. I'm disgusted by the lack of empathy and callous nature of people who hide behind the veil on anonymity on the internet. I'm saddened by the break down of decency and humanity. The self absorption it takes to call others shallow and self absorbed for living their own lives. It is wildly foolish to view a flickering image, in a constructed scene, with lights and a script and craft services just to the side, a paycheck and job, producing a product the viewer themselves has sought out to consume. To judge them from this false construct. To take this fantasy as reality and then discard the person sickens me.

I'm stepping down off my soap box now. I'm going to go quietly be sad and hope somewhere beyond the pale veil there are two souls finding safety and solace in each other once more. It's all we can hope for now, those left behind to live.
Posted by Andrew klaus-Vineyard at Tuesday, March 12, 2013