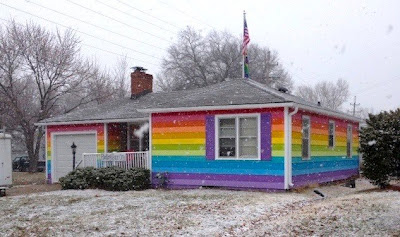 A new equality center has opened in Topeka, Kansas (yay) and the location has caused a stir. It happens to be  across from the compound of right-wing nut extremist cult the Westboro Baptist Church run by God Hates Fags own Fred Phelps (who according to former members might just be a closeted one himself) . The new equality center started by Planting Peace's  Aaron Jackson says the new center, the Planting Peace Equality House, is "...standing up to bigotry and promoting equality,"

It also has a hella fabulous paint job.

So this is what the rabid bigots will see from their compound windows everyday. Awesome.
Posted by Andrew klaus-Vineyard at Tuesday, March 19, 2013