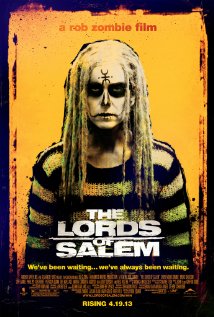 Everyone knows I'm an unapologetic horror fan, and call me crazy but I actually love Rob Zombie. I don't even hate his re-envisioning of Halloween (the first of the two films is quite strong, though I'll concede his sequel while having some surreal and beautiful moments is uneven). House of 1000 Corpses is good campy fun and his quasi sequel The Devil's Rejects is just plain brilliant (if at times borderline torture porn in the first half) and well The Haunted World of El Superbeasto  were I  a straight stoner dude-  I'd LOVE that one) ... But of all his films LORDS OF SALEM (in theaters  April 19th) might be the film for me.


Lords of Salem promises to be a 70's-style psychological horror film (with witches, curses, revenge! ) featuring grand, sweeping cinematography and slow building suspense. It's a welcome break from his aesthetic of hillbilly horror (hellbilly?)

Zombie has brought together a spectacularly packed cast of so many genre vets that  many have had their scenes cut or diminished (hmm blu-ray director's cut for Halloween?) Lords of Salem is presenting itself as a strange beast .

-from IMDB-
Heidi DJs at the local radio station, and together with the two Hermans (Whitey and Munster) forms part of the ‘Big H Radio Team’. A mysterious wooden box containing a vinyl record arrives for Heidi, "a gift from the Lords". She assumes it's a rock band on a mission to spread their word. As Heidi and Whitey play the Lords’ record, it starts to play backwards, and Heidi experiences a flashback to a past trauma. Later, Whitey plays the Lords’ record, dubbing them the Lords of Salem, and to his surprise, the record plays normally and is a massive hit with listeners. The arrival of another wooden box from the Lords presents the Big H team with free tickets, posters and records to host a gig in Salem. Soon Heidi and her cohorts find that the gig is far from the rock spectacle they’re expecting; the original Lords of Salem are returning, and they’re out for blood.