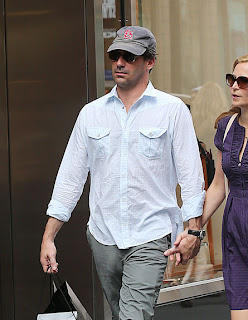 The President of the United States is in Israel, Syria may be using chemical weapons, death and destruction abound...but we are gonna talk about Don Draper's dick.

Several blog/news sources are discussing the awkward situation for  Mad Men where AMC staffers have had to politely inform the handsome 42 year old actor that "due to the late sixties tight fitting pants he could not go commando on screen" . Apparently promo adds for seasons 1 & 2 had to be photoshopped to ton down Jon Hamm's package (kinda like Sony darkening the shadows to hide Andrew Garfield's sizable bulge in his Spiderman costume.)
The New York Daily News "reports" 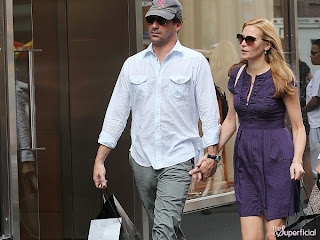 An AMC insider tells Confidenti@l that during filming of the sixth season of the hit show — when the ’60s-style clothing was a tight fit — Hamm was politely instructed by a staffer at the network to please wear underwear while shooting his scenes.

“This season takes place in the 1960s, where the pants are very tight and leave little to the imagination,” a source tells us. “Jon’s impressive anatomy is so distracting that they politely insisted on underwear.” 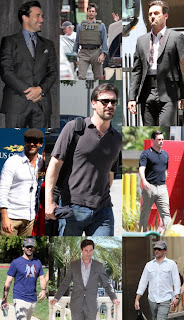 I mean is this a really hilarious marketing ploy to get us to tune back into Mad Men in a few weeks (um, like we were not going to already?).

Jon Hamm clearly goes commando a lot (see photo for evidence)) and well, if you are a guy of  a certain size this can be problematic. It's gonna show, but big deal right? Wrong...it's a penis and in America: we are horrified and obsessed with them. So let's all STARE at Jon Hamm's (insert pork related humorous metaphor here ) .

I find the whole story pointless but kind a funny and the timing is clearly to buzz the show, but hey, it was  n excuse to post pics of  of Hamm in tight pants. so I saw win-win.