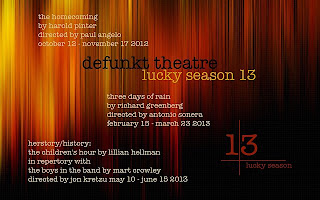 Herstory/History is a mammoth theatrical undertaking by Portland Oregon's critically acclaimed company defunkt theatre. Herstory/History is the staging of two plays in repertory with each other that are two of the earliest positive and sympathetic depictions of gays and lesbian experiences in America to cross the stage: Lillian Hellman's The Children's Hour and Mart Crowley's  The Boys in the Band. Sadly the company has suddenly found themselves facing a new challenge the sudden loss of some funding for these specific shows. the arts are deeply underfunded in the States, and queer art even more so. These are important works essential to the American experience as well as the global LGBT story.
Let's spread the word and help them out on their INDIEGOGO campaign
HELP defunkt theatre HERE!
These are tough times, as we are all aware. The global economic collapse of the past few years have all but gutted the funding to the arts in the United States. As such defunkt theatre finds ourselves in a position of an unexpected funding shortfall for the 2013 season leading into a major dual production of the landmark plays The Children’s Hour and The Boys in the Band. These pieces of theater provide a vital mirror to our society’s struggle with equality, humanity and diversity.
"One of Portland's essential theater companies." - Willamette Week 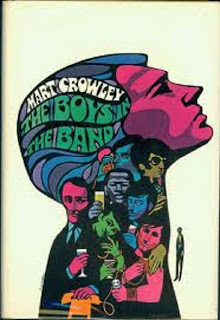 Why should you care? How can you help?  These are both valid questions.  We are seeking emergency funding to fill the gap. Every little bit helps.  (and hey, all donations are entirely tax deductable)
"defunkt reminds us why risky theater is worth our time." The Oregonian

defunkt theatre is a nationally recognized, 501-c3 non-profit ensemble theatre company dedicated to creating innovative productions that challenge conventional ideals of society and theatre. We offer fresh and relevant perspectives on issues of race, gender, and class. We strive to stretch the minds and comfort zones of our audience.
"defunkt theatre has made a name for itself presenting theatre that explores sexuality and gender politics. Their reputation has made them a magnet for directors looking to work with challenging themes."- Ken Hoyt- Just Out

defunkt theatre began in 2000 as four artists with a goal of producing first class, riveting and fearless theater unlike any they saw in Portland.

defunkt theatre has grown and changed since then, but the mission and the aesthetic remain the same. defunkt theatre offers more pay what you can nights than any other theater company in the Pacific Northwest, nearly half of all performances.
defunkt theatre was listed as one of the 12 'Hot Hip and On the Verge' US theatre companies by American Theater Magazine.

Since its inception defunkt has won the following drammy awards:

What We Need & What You Get

We are seeking $10,000 to pay for the production rights to both plays, materials for the sets, costumes, lights, sound, space rental, and compensation for the more than 30 local artists involved in this project.  Half of the performances will be pay-what-you-can to allow access to all members of the community. All funds raised will go towards this production.

Herstory/History : a pair of landmark plays in repertory:  The Children’s Hour by Lillian Hellman and The Boys in The Band by Mart Crowley.  Two of the earliest depictions of homosexuality in mainstream culture, these plays have been rarely seen in recent years  but they still have a great deal to say about the gay experience in America.  Lillian Hellman’s first play, The Children’s Hour is the story of two women falsely accused of a sexual relationship and the devastating consequences of that lie.  The nine men that make up The Boys in the Band were among the first positive depictions of openly gay men in America.   Director Jon Kretzu collaborates with defunkt theatre to produce two evenings of theater that mirror and inform each other, showing us both how far we have come as a society, and how far we have yet to go.

*Note: The Children’s Hour will be performed at The Back Door Theater on Hawthorne Blvd, and The Boys in the Band will be site specific in an alternate location.  May 10th through June 16th 2013.
Both shows  are directed by Jon Kretzu who recently completed a 20 year stint as Associate Artistic Director at Artists Repertory Theatre, where he directed over 40 productions for the company.  Other Portland directing credits include Dracula for Northwest Classical Theatre Company; The Carpetbagger's Children for Profile Theatre; Guys and Dolls for The Musical Theatre Company; Romeo and Juliet, A Winter's Tale, Much Ado About Nothing and As You Like It for Tygres Heart Shakespeare Company; Waiting for Vern, Jeffrey, Bent and The Sum of Us for triangle! productions; Broadway Bound and Hay Fever for Portland Repertory Theater; The Importance of Being Earnest for New Rose Theatre; The Mystery of Irma Vep for Storefront Theatre; and Down the Road for the Oregon One-Act Festival. Jon has also directed numerous productions in Seattle, Milwaukee, San Francisco, Chicago and Los Angeles.  Jon was the dramaturg for Portland Repertory Theatre, has served as a guest director and professor at a number of West Coast and Midwest universities, and has worked as an acting coach in Los Angeles, Seattle and Portland. He has also served as the London and New York theater and classical music correspondent for a variety of Northwest newspapers and magazines.
Even if you can not financially contribute to this project you can still help us my sharing on Facebook, Twitter and all other media you might be privy to!  THANK YOU.
Posted by Andrew klaus-Vineyard at Thursday, March 21, 2013