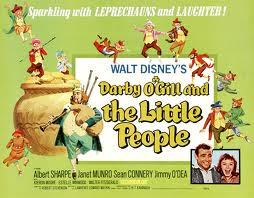 It's that time of year again, to celebrate the luck of the Irish.  Being of Jewish and Inuit descent I ain't got NO Irish in me, though I've been in some Irish thanks to a few ginger exes ( I do love a hot ginger).  To celebrate the day, one usually gets shit faced drunk vomits cheap green beer and likely gets in a fight.  NOT I sir, not I (why do I sound like a pirate all of the sudden?)

I had a hard time picking a flick to post  My husband suggested the Gnomemobile (but they are Gnomes!) I thought about the Jennifer Aniston-Warwick Davis masterpiece Leprechaun but ultimately I went to Disney and the tried and true exploits of late 50's optical effects and the singing talents of Sean Connery- DARBY O'GILL AND THE LITTLE PEOPLE!
(actually one of the best fantasy films ever made, huh, who knew?)