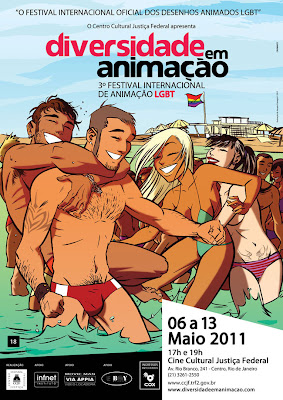 Tomorrow is another day--and with it brings the third annual  Diversidade Em Animação (Diversity in Animation) festival in Rio de Janeiro, Brazil (May 6-13, 2011). It's an exciting batch of 23 animated films, award possibilities, tropical sun and a retrospective on J.J. Sedelmaier's The Ambiguously Gay Duo- 11 episodes of subversive genius that SNL hosted here in the states...I've missed Ace and Gary!  It's great that there is a festival dedicated to diversity in animation, hell, in animation at all. It's a hard, lonely existence animating without the comfort and funding of a studio.  Add to that the drive to turn one's lens on the under- represented and it's a pretty damn wonderfully obscure thing.  I find myself making my South American film debut in competition at Diversidade Em Animação with my film 2010 film Motel.


I am extremely honored to be in such amazing company at the festival and my only regret is that I'm  in grey Portland and not on hand to enjoy Rio this week (I'm instead attempting to balance directing my feature film debut SPARK, recording the amazing new Mattachine Social record and, um, oh yeah, graduate from University eventually-damn you, midterms). Check out the trailer for the festival below (a shot of Motel pops up with the letter T! Possibly the only acceptable shot they could glean).

I wanted to quickly thank the following people who helped me shape Motel into a film that was sought out by the programmers of Diversidade Em Animação: My husband and greatest collaborator Taylor Vineyard, Holly Andres, Grace Carter, Justin Warner, Matthew Kern,  Jon Miller and Paul Davidson.  In some way these people all had a hand in the creation of Motel, supporting me, telling me when it was not good enough (and it wasn't), and hauling heavy ass equipment to galleries to set up the instillation version of the film with me in the summer heat. Thank you all. Fingers crossed.  Perhaps awards are in our future.
Posted by Andrew klaus-Vineyard at Thursday, May 05, 2011