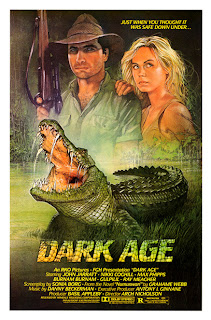 When I was younger, I'd go the the video rental store and snatch up armloads of VHS.  Cartoons, foreign art house, horror films, B-movies--I didn't care.  I had a voracious appetite.  I grew up in a rural hamlet of around 600 people and was bussed to school--the only one in the county--about 30 miles away.  So needless to say, I was looking for escapist entertainment.  One of my favorite genres is the creature feature/large, rampaging animal films. Ray Harryhousen stop-motion mythical beasts, King Kong, Speilberg's summer blockbuster Jaws, Roger Corman and Joe Dante's camp classic Piranha- I love those films.  But my secret favorite amongst them all is a little known Australian Grindhouse flick from 1987 called Dark Age.

Well, due to some snafu with their distributor going under, this intrinsically Australian film was never released in Aussie theaters and sorta fell through the gaps of the Ozploitation boom of the 1980s.  Based on the Novel Numunwari by Grahame Webb, it's a great twist on the rampaging reptile genre.  The Aborigines worship the man-eating croc as the "Numunwari"-a god that contains the spirits of their ancestors.  John Jarret (Picnic at Hanging Rock, Wolf Creek) plays our park ranger lead and the always amazing David Gulpilil (Walkabout, The Last Wave, Rabbit Proof Fence) plays our native wise-man/side-kick; you know, the role David Gulpilil often plays in Australian cinema.  The best news ever for this long out of print lost classic is TAH-DAH some wondrous person posted the whole film on YOUTUBE!


ENJOY BELOW!!! What are your thoughts?  Other than what the hell were his parents thinking letting him watch this film in 1988?