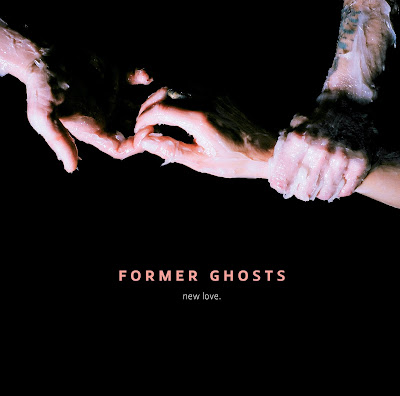 Dark , sexy, and sad.  Former Ghosts is a collaboration of sorts between front-man/songwriter Freddy Ruppert (formerly of This Song Is A Mess But So Am I), Nika Roza (Zola Jesus), Yasmine Kittles (of TEARIST) and Jamie Stuart (of Xiu Xiu). The "brutally gloomy" band that Pitchfork described:


"Sounds like what might've happened to Joy Division if Ian Curtis had bought a Casio and a four-track and fired the rest of the band."

And they do.  And it's bloody brilliant.  Their debut Fleurs was a fine mix of synth pop, IDM, and This Mortal Coil.  It sounded like a lost relic from post-punk's early days and became an instant favorite here at Diggin' to China.  I caught up with Freddy Ruppert in Prague, on tour supporting  Former Ghost's latest album New Love which is darker and yet catchier than Fleurs. It's a record we can't recommend enough.  Read our exclusive interview with Freddy after the jump. 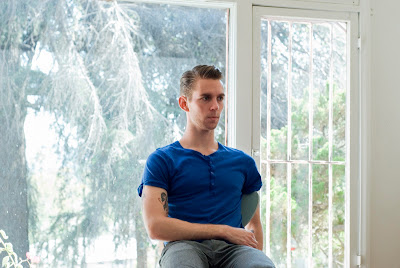 Freddy Ruppert:  Hey!
Diggin' to China:  Howdy, Mister! Soooo ...Former Ghosts started as a solo project that evolved into a full band.  Has that changed your approach to the songs at all?
FR:  I think as far as song writing and actual composing of the songs that hasn't changed much.  The biggest change would be when creating a song, I can get a sense or feel of what would be good for someone's voice, or a feeling that Nika's voice would be amazing for this, or Yasmine's voice for this.  It maybe will change the way I approach a song in the middle of writing due to the different colors of their voices, but the actual song writing remains somewhat similar to when I was doing everything alone.
DtC:  You have a penchant for very confessional raw lyrics, much like those of your band mate Jamie Stewart, do you ever feel the temptation to temper the abrasive with something more commercial?
FR:  I think our (Jamie and I's) approaches to personal lyrics are somewhat different.  But I think lately I have felt interested in not what I would consider more "commercial" but interested in an idea of restraint. If there can be power in things that are not said and power in restraint.  I think this will probably come through and be experimented with a lot more on the next records.  I think also someone like Sade who sings confessional type love songs but who does it in such a restrained manner is really beautiful and has been influencing me lately.
DtC: You really are just a soul singer, huh?
FR:  Haha! I wouldn't really say that.  Maybe in spirit, but in vocal tone I fucking wish.
DtC:  You are based in LA which is the American ideal of blond, shiny, and new to many, and yet you create this dark and sexy art.  You're on your European tour now.  How does the audience differ from those in the states?
FR:  I think the place I live doesn't affect the way I create music so much as more life experiences affect what I make.  Hence, maybe the contradiction in being from sunny southern California.  Playing to a European audience is really great and it differs from the States because sometimes I feel like in Europe people really come to the shows because they want to be at the show and see the band and hear the music.  A lot of times in the U.S. I think it happens that people go to shows because "it is the place to be" for the night, which becomes evident in how much talking there is at shows in the U.S.  In Europe, you find yourself often playing to a very quiet room analyzing your every move.  Also, I think in the U.S. there is a different expectation as to what Former Ghosts is supposed to be, in the sense that people coming to shows expecting for every person that has ever contributed to one of the records performing at the show.  Whereas in Europe, it seems that they are more accepting of whatever live format Former Ghosts is able to present itself as at that point.
DtC:  You have much more press coming out of the UK and in gay press circles; it seems Europe is the launching ground for American bands these days rather than everyone scrambling to come stateside.
Technology has made it so much easier for kids to record records at home and the internet to promote them.  Has this changed the way your band functions at all?
FR:  I think being mainly an electronic musician I've been recording my things at home ever since I started. Since the This Song Is A Mess But So Am I days.  I think that the technology to make music at home is a great thing and I think the type of sound one can get from home recording has a vast range.  I think this increase in music technology and the Internet has really allowed me to do what I've done so far.
DtC:  It certainly has the power to allow like minded artists to connect instantaneously-this interview for example.   The new record somehow managed to be catchy and poppy and yet darker than Fleurs.  Any thoughts about it now that its done and out and you cant edit it more?

FR:  I think more than allowing like minded artists to connect it has allowed people to just connect in general. Sometimes in a great way sometimes in a bad way.  But I think the most important thing is the possibility to tear down the walls between the "artist" and the person viewing the art.  These are bullshit walls anyway.  I don't need to distance myself from what I do and who I am presenting it to.  I think this is important.
DtC:  Absolutely agree.
FR:  I still think New Love is darker when compared to Fleurs.  I think it is poppier in its song structures.  The songs follow more pop song conventions, but the themes I think are overall a lot more bleak.  Now that I have had some distance from the creation of the songs on New Love and releasing it, I feel somewhat differently about it.  There are a couple of songs I probably would remove from it because I don't feel they are necessarily good songs, but I left them on the record at the time because I felt their theme was so directly connected to theme of the record so I put them on the record anyways.
DtC:  As a side note "Taurean Nature" has been stuck in my head for two weeks.


FR:  [laughs] Thank you.
DtC:  You have a pretty solid gay/queer following.  Why do you think that is?
FR:  I’m not exactly sure.  Maybe because my music instead of focusing on a gender that is receiving love, in its expression it tends to focus on love itself regardless of what the gender of that person receiving it is.  I think this is the most important.  An expression of love and the extremes of love itself, not a focus on the sexual orientation of that love.
DtC:  Gender neutral love songs.
FR:  In a way.  It is the same reason why I find Morrissey to be the greatest and the most important.
DtC:  Yes, and he always has a good haircut.
FR:  [laughing] This is also quite important!
DtC:  The visual side of the band , specifically videos for "Hold On" and "Taurean Nature," have been beautifully shot and torturous affairs.  I'm rather impressed/horrified at the drinking in "Hold On," assuming it was all real.  How closely involved are you with that process?
FR:  With "Hold On" and "Taurean Nature" I was directly involved.  The person that filmed and directed them is my best friend Amir Shoucri, so I was directly involved with what happened in those videos.  The other two videos, "New Orleans, New Orleans David Horvitz," and "Flowers" I wasn't directly involved in the concepts or what actually took place/happened in those videos.  The drinking session in "Hold On" is all real. As is the vomit.
DtC:  Oh, yes.  As a filmmaker and occasional drinker, I know real vomit.
DtC:  You work with a lot of really talented collaborators--anyone you haven't worked with that you'd love to?

FR:  I would die to work with Sade.  I would love to do a song with Matt Berninger of the National because I really love his vocal tone.  I would really love to do a song with Marianne Faithful for the same reasons.
DtC:  Who inspires you these days; who are you listening to?
FR:   I'm not sure if what I listen to directly inspires the sound of what I do or not but currently [I'm] obsessed with Patsy Cline, David Sylvian, Derek Bailey, Sade, and a revisit to Nine Inch Nails Downward Spiral.
DtC:  Somehow those all make sense.  So, what's next for Former Ghosts?
FR:  At this point, I think I will be taking a break from touring and playing live altogether, going home to Los Angeles, and working on whatever the next record will be hopefully for release in the first half of 2012.
DtC:  Excellent!
FR:  Thanks so much.

Former Ghosts: New Love is out now.  GO BUY IT!