DtC: So whenever you're ready we can do this. I'm a little bit early.
Ken Mack: Okay. Give me 10 minutes. The maintenance man is just leaving.
DTC: No problem.
I know this sounds like a porno film set up but it's not. The man who once was Ken Mack actually has a maintenance man working on his condo at the time of our interview. So after a few minutes he returns and discussed everything from being a bullied middle school kid in Niagara Falls to his unlikely stint in adult film at thirty-three. .He practically gushed about his partner of just over a year, talked the state of industry in his new career (and first love ) publishing and beamed with pride when complimented on his acting abilities (he does have some chops).

Ken Mack: Okay, ready. Fire away.
DTC: Well, let's get all the David Copperfield things out of the way, then. Where did you grow up?
Ken Mack: I was born and raised in Niagara Falls, NY and lived there until 1998 except for one year at ASU from '85 to '86. I left Niagara when I was 31.
DTC: The Honeymoon Capital of America.
Ken Mack: …and the pollution capital, too.
DTC: So you came out while in Niagara Falls?
Ken Mack: Yes. I came out very young. I met some slightly older guys when I was 14. They were 20 and friends of the older siblings of some high school friends. My best friend since 5th grade is also gay.
Ken Mack: Of the two older guys, one became my "first" and the other became my best friend. We still keep in touch and chat once or twice a month.
DTC: Sounds like that was a real support system for you. How did your family take the news?
Ken Mack: Well, I am the only son after four daughters and nine years younger than the youngest sister.... so.... my dad was thrilled to have a son.
He accepted it pretty fast. They went through a lot raising four girls in the 70's.
DTC: I imagine so. Bullying has been in the news so much lately; how was your educational experience growing up as an out teen?
Ken Mack: It wasn't the best. Middle school was the worst. I was always in classes for the "gifted" honor students, but I think the smart kids were even better at being mean. My best friend got the brunt of it because he was quite feminine. Luckily, most of the school year was too damn cold to stand around and be picked on. We all got rides to and from school. 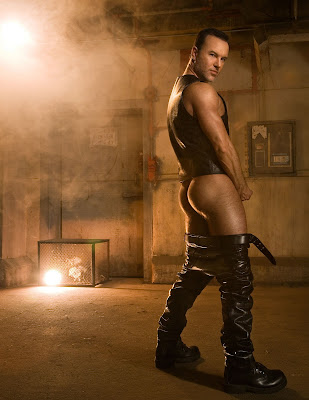 DTC: Did you think as a bullied middle schooler you'd end up being someone who's desired for their sexuality? It's kind of a nice payback in a way.
Ken Mack: Well, the biggest bully had a flaming queen for an older brother. Go figure.
DTC: One of my bullies is NOW a flaming queen.
Ken Mack: I had been with girls when I was 14 also, and I made sure that got around the school.
DTC: Sounds like you're fairly sexually precocious.
Ken Mack: My first girlfriend looked like Kristy MacNichol. She ended up being bi and married a cross dresser that was in the Navy. Go figure.
I went to a gay bar for the first time on my 15th birthday. The drinking age was 18 then and anyone could walk into a bar in Buffalo and get served. City Lights was the name of the club
DTC: When did you first get into adult film?

Ken Mack: In 2002 I started doing "solo" shows on ifriends.com. My screen name was hotpecssupersex I had a straight coworker that was making a ton of moeny on there and leaked it out at work to impress some girls. In 2 years I made enough to pay off my credit cards and have a down payment for a new house in 2004.
DTC: What I love about you, and I mean this in the best possible way, is you don't fit the mold of what we expect from a gay porn actor- you're not 19, rail thin, high, and hairless.
Ken Mack: Well, in 2003 I met Doug and Jay and started with Amateur Straight Guys.com. It was Sept. or October or 2003. Well, all I ever wanted to do was be a playgirl centerfold. I saw my first copy my freshmen year at ASU. Brian Buzzini was man of the year. Not only was I infatuated, but also I was inspired. I wanted that to be me some day. I was 6ft and only 130 lbs
DTC: How do you feel about the allure of "straight men" sites for gay men?
Ken Mack: I think the straight guy business is a very, very complicated one.
I know that many of the guys Doug and Jay work with really are straight and just there for the paycheck. It is a lot of work.
DTC: I've interviewed a few people in the industry and some, like Trevor Knight, talked about how they hate working with gay-for-pay models.
Ken Mack: They aren't as in to it at all, but it is super hot when the guy is a newbie and you are the one expanding his boundaries for the first time.
DTC: What are your best and worst experiences on set?
Ken Mack. Yikes, in what respect? Co-stars with bad breath? Or crazy directors? That should be off the record. [laughs]
DTC: You're versatile in scenes, but there still seems to be a lot of bottom shame among young, so-called straight-acting or masculine identified men.
Ken Mack: I don't get that because eventually they all come around. It seems that way. So and so bottoms in his last video!
DTC: [laughing] Very true-Chad Hunt immediately springs to mind.
Ken Mack: Exactly.
DTC: Has it affected your personal life? Dating and such? 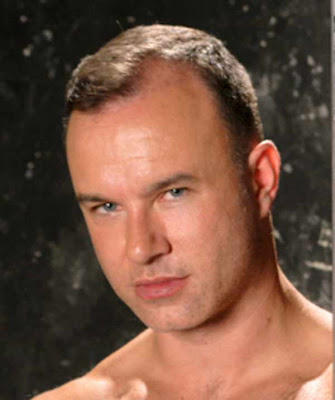 Ken Mack: Of course! I don't think people realize the power of the Internet when they get into this business.
DTC: I've learned the hard way. I've had two stalkers myself.

Ken Mack: The first thing I tell anyone who asks is that "Everyone will find out” if you have issues with that, then don't do it. Some cousin's friend's gay uncle will recognize you and then BAM; it is all out there.
DTC: It's very true! Google will out you.
Ken Mack: Internet scenes bring you instant recognition, but the studio work takes time to build. Once my Titan and Mustang movies hit AEBN and had been out for rentals for a few years, I really noticed that people everywhere knew who I was. I haven't done any videos for over a year now, but I actually was recruited to my current job through someone I met in the adult industry.
DTC: I think I came across your work via Suite 703's site.
Ken Mack: Yes, and Suite 703 was some of the last work I did.
DTC: Have you officially retired from adult films?
Ken Mack: I guess. In 2007 at the GAYVN expo, an older and much more successful porn star said to me that he stopped doing vids because he didn't want to be the oldest guy in porn. I am in a committed relationship now, for over a year actually. He doesn't like to share.
DTC: I think that's a nice trade off.
Ken Mack: I don't think I want to be the oldest working porn star
DTC: But on that note- don't you think the community could use more visible representations of hot older men, not just the 18-35 demographic? It's not like you stop fucking after you turn 40.
Ken Mack: Absolutely. Instinct just did a cover story about the over 40 gays being invisible. I consider myself to be very lucky. To start what I did when I was 33 and fall in with Titan, Joe Gage and ASG all at the same time. [It] was a very special time in my life.
DTC: I want to commend you on something that is rarely touched on in porn these days, especially in this digital age- you can actually ACT.
Ken Mack: I did Dad Takes a Fishing Trip in Florida for Joe Gage in early 2009. It had a good mix of older and younger guys, but Joe is all about the acting. If I could just do movies with Joe, I would keep doing them as long as he would have me. Thank you for the compliment on the acting skills. I find it VERY difficult to watch my own scenes.
DTC: Your scene with Vance Winter is incredibly hot thanks to the protracted opening sequence and the acting job you both pull off.
Ken Mack: Now that does bring back special memories. We really hit it off and I think it shows in the scene. That was my first scene for suite 703 and I had just met Jim Steel that day for the first time. Vance was actually supposed to be the bottom in that scene, but we did a last minute flip and Jim loved me for being so open minded and easy going about it all.

DTC: That's awesome-though I've always wanted to see it play out the other way as well. [laughs]

ken mack is still as sexxy today as he was years ago-great bod, nice package-perfect 40+guy next door. Would love to see him come back to suite 703-I really enjoy his films.Hotttt! Rickaaa

I just want to say that Ken Mack and Vance Winters together... "UHH!" just thinking about it... I love it!

Ken Mack is one of the hottest 40+ guys I have ever given my eyes the pleasure of looking at. Of i could i would totally get all in the sack with that guy!!!