An Open Letter to Tila Tequila

Dear Thien Nguyen/Tila Tequila/Miss Tila (Yes, she really has this many names.),

I debated bothering to write this and have waffled a number of times.  I was first prompted to approach you when your "celebrity gossip blog" was actually a series of poorly written posts, more suited to a 14 year old's Facebook than to anything presenting itself as adept.  But, the moment passed and it seemed that you must have been kidding about dethroning Perez Hilton as a professional blogger, since nothing included was timely or polished.  But, then you cut up your arm and blamed it on a disassociated identity, got that ridiculous inverted bleached bob a full two years after it was relevant, signed up for and dropped out of celebrity rehab, claimed to be pregnant and have a miscarriage (If you were, the way that you milked both for attention was startlingly immature.), had a giant garage sale at your home, claimed a series of serious mental issues and advocated that people not use medication, wrote a series of blogs about Hollywood's ties to Satan, took advantage of your "wifey's" death for media coverage, did the same with the suicide attempt, utilized being pummeled with detritus at The Gathering to make money and garner further public notice, and made so many other attempts at clinging to what little spotlight (metaphorically, we are talking more nightlight at this point) remained available to you .

It is not as if any recent behaviour has contributed to my being pushed into writing this.  Honestly, I am taking the time now because I am no longer entertained.  I no longer receive a vicarious thrill from seeing what sort of shenanigans you have decided to become involved  in.  I don't care what sort of hideous outfit your stylist coerces you into.  I am less than marginally concerned whether you do drugs.  Maybe you made a pornographic film recently.  Yawn.  Don't care.  The rumours aren't even remotely compelling.  You have already done all of the embarrassing things that any one individual can to make themselves an unemployable fool.  I know that you will be tweeting like a mad person, appearing in choreographed paparazzi meet-ups wearing what you deem to be "tomboy" clothes (really just marginally age appropriate clothing and certainly not noteworthy), and making public appearances in the shortest dress you can find/something that makes your areolas visible and writhing about on the nearest photographable surface (Eventually events will get wise and start sprinkling chili oil on these to keep you off, like mean people do to keep cats out of the yard).  It's all too predicatable.

You have had multiple purported pregnancies, attacks, drug problems, financial problems, forays into adult entertainment, et cetera.  Ok, I get it; you will do anything to remain in the public eye...anything.  But, nobody cares.  You still have fans, a rag tag assembly called the Tila Army.  That's great.  I don't care who they are, how old they are, whether I respect them, how smart they are, why they like you, or if they exist.   I just don't.  If they are wonderful supportive people and you feel like they are your family, make them your friends on Twitter and Facebook and ONLY communicate with them.  Lock that shit down.  Make everything private.  Don't invite the world into your pants and then get mad that they tell you your snatch stinks.  Only invite people that want to be there. 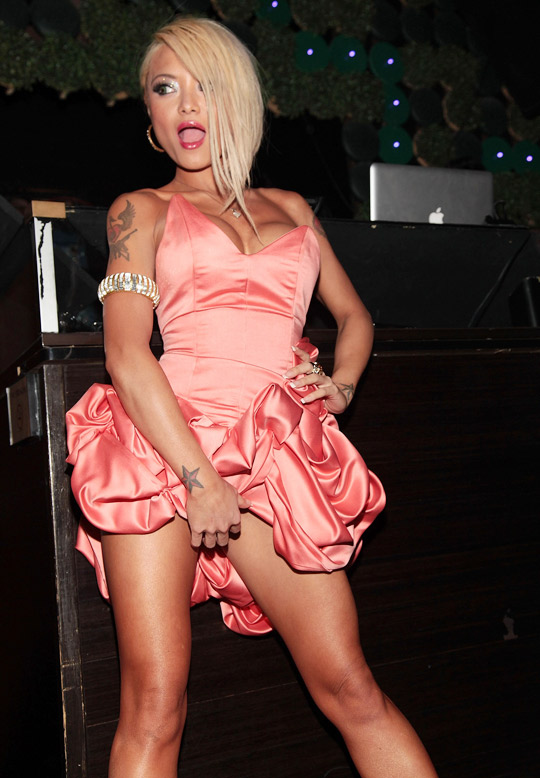 Make this a lifestyle choice until people care again.Give the blog a rest.  Let it go on hiatus or let it become a professional entity.  Either black it out or hire a PROFESSIONAL staff of writers and a team of editors, seriously, a team.  Get your hands off of it.  If you need to publish a wanky maudlin poem, do it for your friends on Facebook.  If you need to show people how cute your ass was in 1998, do it via IMing and email to people who solicit that.  If you want to tell people that you are masturbating, find a buddy on Craigslist, date someone, find a specific audience.  Don't make it a blanket twitter.  And, let's be clear, I am very pro-masturbation, but  it's enough to say in general that you do it, everyone doesn't need timely updates. 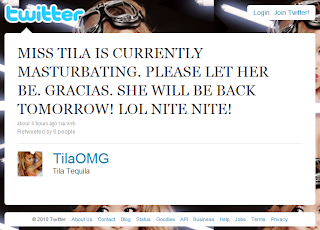 What everyone needs is to wonder what happened to you.  I clicked on an ad on Gawket.TV (one of the best web sites ever) the other day and discovered a show called World's Dumbest on Tru TV.  Do you know who the commentators are? Danny Bonaduce, Daniel Baldwin, Todd Bridges, Tonya Harding, and Leif Garrett, among others.  These people have all been in worse public standing than you are and (if we overlook that many of them are more talented in their field than you are) you have every chance of achieving the fame they now enjoy.  Yes, it is a terrible show.  But, it is a terrible show that would not only not hire you to comment on a person riding a snow mobile into a tree, but it would also not invite you to ride the snow mobile or stand in for the tree.  Refer back 2 sentences and completely deal with how shocking that is.  Tonya Harding is more employable than you.  Do you know why?  Because she went away.  Your turn.

People will be interested again when you take a break from purposely being over-saturated, tabloid fodder.  Go away.  You will be allowed to come back when 10,000 people have (totally uncoerced) asked, "Whatever happened to Tila Tequila?" or, even better, "Tila who?"  It's for the best for everyone.

People who really hate Tila: www.TilaResistance.com (Thanks for the Twitter pic.)
Reason why they do: Tila's Twitter, Tila's "Gossip Blog"
Pictures were rounded up from various sites.
Posted by Alia at Saturday, September 11, 2010

Her personal actions are private until you start following them.

I'm not telling you to disappear.

Nice job Alia :) Couldn't have said it better myself :)

I hope she takes your comments seriously, I really think the death of Casey screwed her up and she's made up lies to compensate for the pain she feels. She's done some terrible things, unspeakable things but I do think she has unresolved mental health issues she needs to go off and sort out with a lot of therapy, then as you said, come back and try again. I'm sad to say I don't think she will listen to this because she is completely tapped now.

It's time she listens before something else horrible happens to herself or someone else. She's a ticking time bomb.
Great letter. Thanks for sharing!