Lilo, This is the Straw Near the Next to the Last One

I am sure that you all know by now that Lindsay Lohan has tested positive for both amphetamines and cocaine this week and admitted as much in tweet-form: "Regrettably, I did in fact fail my most recent drug test and if I am asked, I am prepared to appear before judge Fox next week as a result.". I am sure that you also know that this means her parole has been revoked and that a bench warrant has been issued for her arrest; she is to present herself to the court on Friday morning to begin proceedings. What you likely don't know (or potentially care about) is the fact that natural redheads make up a mere 2% of the human population and an equivalent amount of the celebrity population. Who are natural redheads (like me) supposed to look up to? If you say Carrot Top, I will punch you in the throat. Lindsay Lohan represents the lone natural ginger female celebrity in her age bracket, the lovely Isla Fisher being a little older and Laura Prepon having been blonde for so long that there is an internet debate going on right now about whether she even is a redhead. Yes, I love Emma Stone, but that's a dye job and, though I will give her a Deborah Messing pass, she doesn't know what it is to grow up red. I have been a vocal advocate of Lohan's entire career (yes, even the musical one) and had formed a theory using her hair colour as a barometer of her well-being. But, this week's ordeal saddens me because not only is she not getting better, she also fucked my theory and I can't decide which one is proving harder for me to move past.

My theory and heartbreak are detailed after the jump.

Initially, I suppose I ought to reveal my bias: I really do love Lindsay Lohan. I don't really care about the weird family (although obviously they are less than ideal) and I don't care about her sexual orientation (love is love) and I don't care that she keeps fucking up (although I do wish she would stop now). My love for her is unconditional. I trust that she will follow in the footsteps of former child actors and drug abusers Drew Barrymore and Robery Downey, Jr. and will avoid the perils of being a Corey. In order to keep appraised of her progress in the most time efficient way possible, I devised a theory based upon my understanding of the ginger mind and utilizing the simplest and fastest means of analysis, tabloid covers and gossip sites. 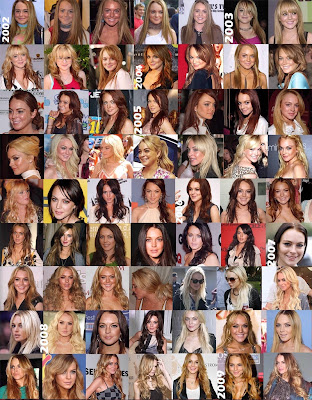 My idea is based upon the premise that red hair sets an individual apart and that redheads have their own culture. If you don't have red hair, you won't ever understand, but it's true. Being ginger becomes a core part of a person's identity and when a person is satisfied with who they are and how they are identified, they embrace their natural hair colour and everything that comes with it. I decided that Lilo's troubles became increasingly amplified as she began messing about with alternative hair colouring.
2005 marked a fun year for teen starlets as they all seemed to be up in the club without panties. Lindsay became a sometimes gal pal of Paris Hilton, who would later famously snigger as profusely perspiring Brandon Davis labeled Lilo a "firecrotch." Hilton, Nicole Ritchie, Britney Spears, and Lohan were all blonde during this period. Succumbing to peer pressure, Lohan picked up both a drug habit and a bleaching habit.

For the next five years, the public watched as Lohan's career tanked, her personal life took the forefront and her hair colour assumed a range of shades. It seemed, for a time, that the red hair would return for film work.
For 2007's Georigia Rule, she was a strawberry blonde (as close as she would go to red). 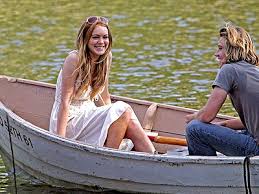 But she had already muddied the career waters by appearing as a blonde in Prairie Home Companion (2006) and by having black hair in Bobby (2006). Based on my theory, she was already disassociated and troubled, but the return to her natural colour should have marked an attempt to steady herself. Sadly, she shrugged off the colour and the career, marking 2007 as the official death of both.
Drinking and driving is assuredly a very real concern, but, for Lindsay, it would seem that throwing blonde hair into the mix meant certain conviction. But, she is not alone in this. Young stars with poor, pale dye jobs have proved veritable arrest magnets.
Certainly, for many, the final nail in the coffin came in the form of the thriller I Know Who Killed Me. Lindsay plays not one, but two dark-haired women in this much beleaguered film. Though my personal opinion is that it is so bad that it is good, critics oddly did not warm to it and audiences rejected a sexy brunette Lohan.


Lindsay had been a budding sex symbol. Readers of FHM secured her a tenth place spot on the list of "100 Sexiest Women" in 2005. She placed third on Maxim's" Hot 100" list in 2006 and first in 2007. In February 2010, The Daily Mirror voted her tenth on a list of "sexiest redheads ever". Each of these accolades, regardless of date, was accompanied by images of Lohan with bright red hair.

The world wants a fire-haired (crotch notwithstanding) starlet and I had convinced myself that when Lohan returned to her roots, she would be accepting that role, ready to engage in the stability of a working life once again. A third blonde mug shot? Of course. Not ready. A blonde Lindz with Fuck U painted on her nails in court? Umm...okay. Not ready. Blonde hair above unsupported breasts in the world's worst silver jumpsuit at the MTV Movie Awards? Whatever. Not ready.

But, et tu Lindsay? When, in early September, the internet was alight with news of your radiant return to red, I thought that you were ready. I thought that it was time. What a misguided soul I was. Less than a week later, your tests were coming back positive and though I would accept that from a brunette Lindsay and likely expect it of a blonde one, this was a cruel and unexpected blow to the very core of my being.
So, I have had to let go of a theory that has allowed me to ignore your behaviour and remain hopeful about your salvation. It is this loss that hurts the most. You have made a fool of me. But, I have begun devising a new denial generator and I only ask that you help me to power it by not directly undermining it as you have with this one. Here is the story: You don't really want to do drugs. The problem is that you left your house key/favourite earring/your lighter in your jail cell and you have been calling the warden for weeks to get it back and he isn't taking or returning your calls. You cannot be without whatever momento you have left behind and have to go back in after it or have it lost forever. The alternative scenario involves you needing to go back to solve a crime on the inside and that one is decidedly more complicated. Email me for the full rundown on that if you think that option number two seems more doable on the denial tip.
Posted by Alia at Tuesday, September 21, 2010