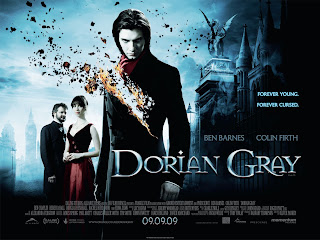 The Picture of Dorian Gray stands as the lone novel in the impressive cannon of iconoclast Oscar Wilde.  And it's a masterpiece by all accounts. A dark horror-drama of decadence, moral decay, art, and murder. George Sanders, Donna Reed and a young Angela Lansbury starred in an acclaimed film version in 1945. There have been sporadic re-tellings since including Matthew Bourne's recent ballet. British director Oliver Parker is a veteran of Wildean adaptations having helmed film versions of both The Importance of Being Earnest as well as An Ideal Husband  (and by no means a stranger to hedonistic depravity having had bit roles as an actor in Clive Barker's seminal films Hellraiser, it's   sequel Hellbound: Hellraiser 2, and a pivotal role in Barker's ambitious cult classic Nightbreed) and now turns his attention to the Gothic horror of Dorian Gray (2009).  In adapting the novel first time scribe Toby Finlay jettisons much of the great dialogue, deletes characters, pour over lurid sex and violence and launches an extended third act complete with newly added character/love interest (a really solid performance by Rebecca Hall) in the early Jazz age.

Gone is  much of the flowery monologue-like moments of societal and moral critique (for which the book is so beloved) as well as the plot point of a cursed french book that corrupts Dorian into the hedonist monster he becomes (here Dorian is goaded on by Henry and by learning the secret of his seeming immortality). What's left is a fairly straight forward horror-drama with stylish turns and solid acting that despite it's changes from the source material strikes a delicate balance of appeasing Wilde's academic fan's as well as genre fans looking for a bloody good time. Ben Barnes (Prince Caspian of the Chronicles of Narnia films shedding his kiddie image for good) stars as the titular painting subject and artists muse Dorian Gray with Ben Chaplin (A Thin Red Line, The Truth about Cats and Dogs) as Basil Hallward, the artist who paints the accursed portrait. The always stellar Colin Firth as the decadent Lord Henry Wotton (Firth would follow up this performance with  his award-winning, devastating turn in Christopher Isherwood's A Single Man directed by Tom Ford )
Parker's Dorian Gray is a sumptuous gorgeous-to-look-at period film with great costumes, amazing sets and impeccable acting from some of the best British character actors around. The effects are  quite good and in the case of a maggot emerging from a tear duct (don't ask) - truly repulsive. Some of the sex and gore is a tad repetitive, though we do get moments of Dorian's bisexuality throughout the film which are have been  omitted in previous film versions.  Despite one somewhat silly attempt at a boo effect,  Dorian Gray is a taut atmospheric horror film that builds with a creeping tension that thrives on it's souless blank-slate faced leading man who gives a rather conflicted performance as he wrestles with his realization that absolute power corrupts absolute. All-in-all highly recommended for fans of smart literate horror and fans of  great literary adaptations alike.

Sadly the film got only a limited release in the United States so hopefully  this solid adaptation will find it's audience on DVD and Blu-ray.