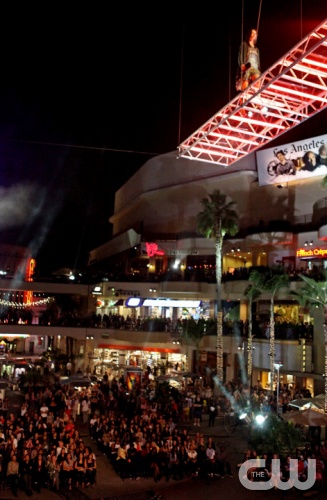 The gals arrive at the location of their first runway challenge and the viewers realize that Rhianna looks better in a broad hat and that their first runway challenge is completely wank. No, seriously. Mr. and Miss Jay attempt to rationalize making these poor awkward women apply their own make-up, style their own hair (complete with embedded product placement), don Diane Von Furstenberg duds, strap on a harness (calm down, not like that) and traipse down a runway four stories above the audience by telling them "the stakes are high." At first, I thought that the audience's only view was up the quaking models' wrap dresses, but there were also monitors displaying the action. However, the monitors amplified the women's progress in such a way that every one of them appeared to have the calves of a track star. Poor calorie-counting Anamaria must have contemplated tossing herself off the runway when she saw that...or when she fell returning from the runway.

That's right, Anamaria fell. The editors must have been ecstatic that their bitch edit would also contain a moment of comeuppance for their reigning mean girl. In addition, the catwalk exposed Sara's extreme stupidity (“At first I didn't get the point that we were going to be wearing a harness. I thought it was like you fall, you die.”) and her believability when when strutting her stuff (I don't know. It's what Mr. Jay said.). Kacey is blind and unsure of what the word "literally" means. She says, "I'm scared for my life. My heart is literally pumping out of my chest. Literally." "Literally pumping out of my chest" as in Indiana Jones and the Temple of Doom, or as in a misuse of the word "literally"?
The photo shoot is next and the Tyra Mail indicates a bullying theme. I am already disappointed; Britain's Next Top Model dealt with the same issue via photo shoot and I just know it was better (edit: it totally was). The girls share bullying moments the night before and we learn that Anne doesn't like being a giant. Chelsey's pale skin was a target and Kayla is gay. Hey, did you guys know that Kayla is gay? I can see now that Tyra will, once again, be relying upon Kayla to supply the tears that fuel her career. Though it is never shown on camera, I am certain that Tyra places funnels under the girls' eyes and a tube allows her to shotgun their sadness during breaks in interviews. Sometimes, I can almost hear the chugging.
Mr. Jay greets the bullied masses at the photo shoot waring a hideous shirt with band geek written across the front and explains that he was mocked for this in high school. He wears Prince boots to compensate for his height and is a gay Latino man. I love the crap out of Mr. Jay, but his role in band was his biggest problem in high school? Uh, ok. He rips off his shirt and reveals the words “creative genius” underneath. He tells all the girls that the shoot is about reclaiming your identity, addressing what you were called and re-framing it as a positive. This almost makes sense until Tyra shows up. See, band geek could mean creative genius. The two could reasonably be synonymous, which would emphasize the issue of reclamation, but Tyra has got to fuck stuff up. Her outer shirt says “Big Forehead”, which like band geek seems to be soft pedaling things, and her inner shirt (which it takes her an unconscionably long time to reveal as she can't seem to rip the outer t-shirt off. I see a self-pitying story on a later season, “One time, I had to rip a t-shirt off and I really wanted to, but I just couldn't.”) says “Super Model Turned Business Woman.” Ugh. Having a fivehead (and that's for damn sure what they called her) is not a parallel with business savvy. Also, it's nice that Tyra has two terms that make her special to everybody else's one. The shoot is, at this point, fucked. .
So, to ANTM, bullying is best conveyed with bikinis, sixties Twiggy eye make-up, and derogatory terms written on the body, but buffered by the presence of one “power” term. But, just as Mr. Jay and Tyra stopped short with “band geek” and “big forehead,” so do the rest of the girls. Real epithets become watered down. Instead of what I am sure were truly hateful terms for her sexuality, Kayla picks “queer.” Queer? Really? The kids that teased you in high school called you the politically correct term “queer”? That strikes me as particularly tolerant bullying or the CW stepping in and undermining the entire point of the exercise. Furthermore, the girls must pick their own terms. It's a good thing that Vanessa was eliminated because “Rich Bitch” probably doesn't garner much sympathy. But, neither do many of these girls chosen slurs. It's pretty clear that this isn't a harshly bullied group, with the exception of a couple.
Guest judge: Diane Von Furstenberg
In order of call out:
#1 Anne
During the lead up to the shoot, Tyra actually asks Anne when the last time she cried about this was. Anne says in high school and Tyra imperceptibly licks her lips before telling her that she stills seems to be carrying the emotion with her. Let it out Anne; let it out.
#2 Kayla
#3 Chelsey
#4 Kendal
#5 Lexie
#6 Liz
#7 Jane
#8 Esther
#9 Chris
#10 Rhianna
#11 Kacey
#12 Sara
#13 Terra
#14 Anamaria
Obviously, Anamaria is sent packing and the audience couldn't be happier as we have all spent the last hour listening to her carp on about her gifts. However, it is ironic that an episode themed around self-acceptance and reclamation tells this girl she has to leave because she is too thin. Lanky can be fierce and bony can be slim, but you, Anamaria, are gross and need to go home and gain weight. Ummm...okay?


Next episode is time for MAKE-OVERS!!! Yippee. I peg crying for everyone. And Tyra shows up at the house for more heart-to-hearts. She seems to have too much time on her hands now that her TV show is over.
Posted by Alia at Monday, September 20, 2010