Perhaps, like me, you have long felt that America's Next Top Model is just another platform Tyra Banks devised to remind people that she is relevant. Perhaps you, too, tire of watching Tyra don ridiculous costumes, adopt terrible accents, pretend (on more than one occasion) to pass out, and arrange both sadistic make-overs and overly intrusive heart-to-hearts that imply she is paid per tear for the damn show. Or maybe, the consistent choosing of girls utterly incapable of being the sort of model implied by the show's freaking title is the sort of incongruity up with which you will not put. I have indeed felt all of those things. This is why I have taken to watching Australia's Next Top Model and Britain's Next Top model, both of which take the industry for which they are grooming stars much more seriously and both of which are not afraid to be brutally honest with the contestants. However, I was lured back (as if I ever really stopped secretly watching) by Tyra's insistence that this season would be legit or, as the first episode drilled into my head, ad nauseum, “elevated.” 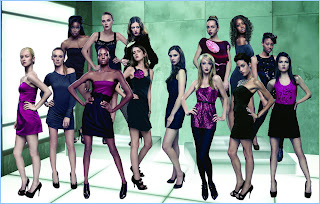