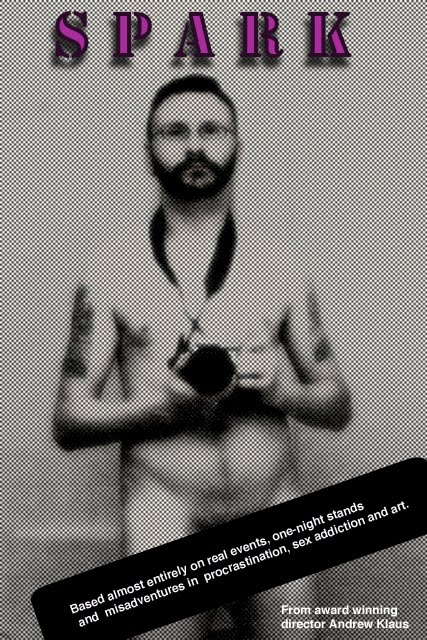 ALOT is going on these days, Diggin' To China is going through some growing pains-with amazing  new contributors coming on board very soon (YAY!), preproduction on a feature film co-directed with Justin Warner A Forest; the debut of my new band Mattachine Social , Our Heroes Bleed Glitter, this fall; a new A is for Accident album  entitled The Good Prince due early winter and if that wasn't enough I happy to announce and offer a sneak peek at the first teaser poster for Spark, my feature film directorial debut. Spark is a hard film to define, part improvised fiction, part staged fact, narrative and experimental sentimental and detached and will definitely help me live up to the  "art-porn auteur " title bestowed upon me by Just Out. It's existed in various forms for over two years slowly coming to fruition finally. Spark should be ready in early 2011.

Spark details a few days in the life of a sex addicted artist as he jet sets around the globe from rural small town America to the fashion week in Paris and sex romps through Iceland, to sobering realities in the Pacific Northwest as he tries to trace the root of the creative spark and find a way to survive his own inner demons. Spark blurs the lines between artporn, documentary, and fictionalized narrative film making creating a dreamlike  look into the search for the creative spark and for what drives an artist to create in the first place.