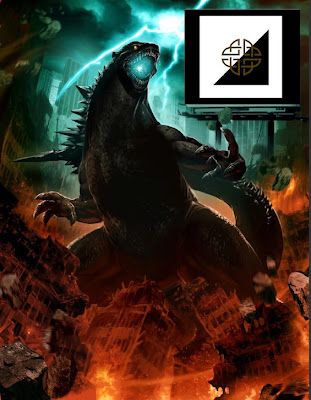 Legendary Pictures (Watchman, 300, Inception, The Dark Knight  ) have stepped up to the plate to make amends for the sins of Roland Emmerick and Dean Devlin's GOD-AWFUL 1998 American take on the ToHo classic Gojira . While I 'm partial to the hokey rubber suit cult "classics" the original Japanese film Gojira remains one of the most stirring  anti-nuclear armaments films  to this day. It encapsulates post-war Japan's lingering emotional wounds of the atomic bomb blasts in a way that few films have and is a potent mix of heartbreaking melodrama, political  sci-fi allegorical polemics and great monster movie thrills. Yes subsequent sequels were monster mayhem and OH do I love them for that (as I write this the Ryuhei Kitamura insanity that is Godzilla :Final Wars is playing a s a distraction  in the background.) But it's important to remember Gojira taught us something before being poorly dubbed and reedited with Raymond Burr into Godzilla King of Monsters for the creature feature hungry American movie audiences of the 1950s.


I'm guessing in this age of endless  US war involvement  and the promise/contractual obligation between Legendary Pictures and the esteemed ToHo Studios to stay true to the origins of Godzilla this time around (screw you 1998 "American Godzilla") the creature feature will perform it's function of being a societal barometer. The atomic age of science fiction films (and all genre films to a large extent) were/are a projection (no pun intended) of a society's socio-political angst, their economic pitfalls, and their moral collapses- they are explorations of the psychic damage we all seem to subconsciously share.  We go see films that scare us because we are afraid already and we need the release, a controlled blast- much like the one that created the mythic Godzilla. All the high concept analysis aside- Godzilla films kick ass in a very FUN way and with Legendary pictures esteemed track record (less said of that Clash of the Titans remake the better) I'm sure summer 2012 will belong  once again to the King of Monsters.
Posted by Andrew klaus-Vineyard at Tuesday, July 27, 2010