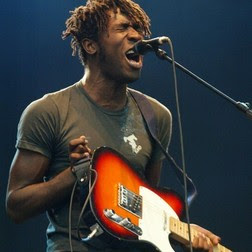 AHHHH! The very sexy and charming Kele Okereke of the brilliantly addictive British band Bloc Party has recorded a solo album. The Boxer (perhaps a reference to the unfortunate racist/homophobic bashing he encountered when attacked physically by punk icon/wackjob John Lydon) his solo debut was recorded following some much needed time off for Bloc Party after the tour for their third album the electro-rock tinged Intimacy. To behest I saw them on that tour and I'm super thankful as Intimacy didn't grab me on first listen (unlike their debut Silent Alarm which remains fresh overtime I hear it)  but their live show was mesmerizing and Kele Okereke won me over battling a sore throat and chatting with the cute boys in the audience-and there were MANY.
Check out his first solo single  "Tenderoni " after the jump.