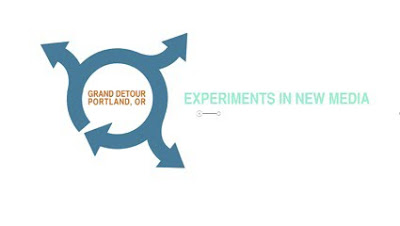 Grand Detour, a new center for experimental media, is opening its doors this

May.
The space (located in the historic John Deere building in industrial SE) will be a
destination for national and international touring filmmakers and curators. We
are planting the seeds towards our larger goal of becoming Portland’s hub for
innovative video and media related artworks. Grand Detour will be a haven for
underground artists, digital methods classes, installations, and community
discourse.


Grand Detour is kicking off its inaugural summer with a series of presentations
from Portland experimental filmmakers and video artists. We are extremely
pleased to be sharing our Portland debut with local filmmaker Andrew Klaus

(more after the jump)


May 18th, 2010
7pm!
THINK/FEEL: The experimental cinema of Andrew Klaus
“Evoking Kenneth Anger and Floria Sigismondi, Klaus is able to rend a delicate and exquisite beauty out
of the ugly margin of the world. By turns seductive and confrontational, his work is as frightening as a
lighting storm, and just as powerfully electric.”
Nick Mattos (writer)

Portland filmmaker Andrew Klaus has a well earned reputation for exploring
the darker corners of the creative experience. His pieces mine the
subconscious for provocative and surreal imagery, the erotics of power, and
the fine balance between lust and fear “with a strong visual style and
narrative tendencies” (auteur Bruce La Bruce). Klaus explores the artists’
portrayal of self in a body of work writer Byron Beck claims as having “the
subversion of Piss Christ and the reverence of La Pieta.”

Klaus has contributed to LIFEBOAT: Hamptons, the inaugural Scratching the
Surface arts fair, Odds and Ends (Seattle, WA) and has directed several short
films including THIS HOUSE IS NOT A HOME, winner of the 2007 VISUALS
Film Fest Audience Award and Lazarus (Official Selection BANG! Festival de
Videoarte de Barcelona; Barcelona Spain). Klaus has collaborated with such
artistic luminaries as Holly Andres, Grace Carter, Andy Goldsworthy, Silas
Howard, and the Butchies. He maintains the culture and arts blog DIGGING’
TO CHINA and is married to fellow respected artist-law student-and-toy
designer Taylor Vineyard.

Also screening, The Porno, an animated “adult” short by Justin Warner.
Justin Warner is a native Portland, Oregon artist. His work has appeared in
local theaters and stage productions from New York to Seattle. He works
closely with a local band, Violet Uprising, and has his fingers in many different
aspects of video and animation and music. Written about in The New York
Times and many articles and blogs, both nationally and internationally, he
hopes to continue to produce work that shocks and amuses.
More on Andrew Klaus at Diggin' to China :Andrew Klaus
Posted by Andrew klaus-Vineyard at Saturday, May 08, 2010