Swallows - Between The Sea and Sky 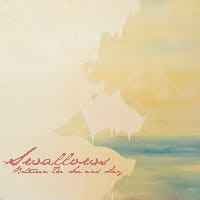 Portland, OR based Swallows have consistently been flying under the radar, steadily releasing engaging dynamic and provocative music that sounds far more complex than their boy-girl duo make-up. Following the one-two punch of Cloud Machines (2007) and its remix twin Loud Machine (2008) comes their strongest record to date Between the Sea and Sky. The album was recorded by their long-time producer the late Kip Crawford who tragically died last year.
The record expands drummer Jon Millers atypical world music influenced percussions, sounding here like a man with 10,000 arms with only minimal overdubs. Singer-guitarist Em Brownlowe steps father forward with Swallows most lyric centered album yet. The evocative imagery heavy lyrics of songs like "The Lighthouse", "The Bay"  and "The Kingdom" paint poetic soundscapes in the rock-y palette of post-riot grrl Pacific Northwest. Their guitar -drum sound is at once straightforward rock and yet experimental, the love child of Patti Smith and Sonic youth with shifty rhymes reminiscent of early throwing muses. Between the Sea and Sky is  impressive step forward for the band that is quickly making a name for itself as a must see band with their packed riff heavy shows. The album release party for Between the Sea and Sky was a standing room only affair, so hurry up and catch this band while you can in an intimate setting before they start selling out bigger venues like fellow Portlanders The Gossip.
Posted by Andrew klaus-Vineyard at Sunday, April 11, 2010