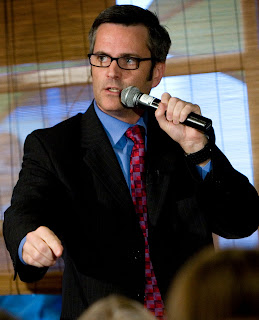 UGH, so the mindless waste of time that is the SECOND attempt at recalling openly gay Portland Mayor over his relationship with a then 18 year old legislative intern Beau Breedlove ( my readers KNOW  how I feel about him) FOUR years before Adams ran for mayor (which he admittedly lied about-because it was tacky and the question was no one's business in my opinion)  had a rally today- and about fifteen(!!!) people-including Breedlove attended.   Wow,  to quote my dear friend Matthew-  "I never thought I'd use the word dignified about Monica Lewinsky but...."

Let's look at the facts: Beau moves off to Provincetown, suddenly moves home trying to sell a "book he wrote" about being a sex scandal survivor. He spends 10 days in rehab according to his recent interview with Just Out  for "stress and exhaustion" (yeah that's Lindsay Lohan's coke whore excuse too.)  Hmmm, right-small fish who thinks he's a bit bigger in a  small pond couldn't make it it a bigger pond one might assume?


Last time I wrote much about the recall campaign it was run by local wackjob Jasun Wurster who then took to enameling me repeatedly and very creepily mailed me at my home a personalized join the Recall campaign with a personalized not on a pink post- it (a nice touch don't you think?)


Look 15 people a rally doth not make. Next time you all want to gather around Beau Breedlove  and pretend he's a celebrity just take the aging twink out for dinner I'm sure he won't mind someone else picking up the tab.

With 20 days left to collect signatures to attempt the recall the campaign needs over one-thousand signatures a day, every day remaining... This is going down with even more of  a wimpier than the last recall.  Give it up, get a life people.
Posted by Andrew klaus-Vineyard at Thursday, April 01, 2010