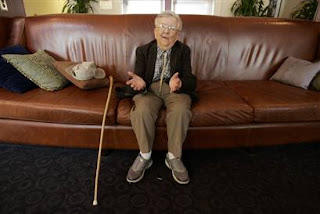 Meinhart Raabe may have only been on screen for a mere thirteen seconds, but his role of supplying the death certificate to Dorothy for killing the Wicked Witch of the East in MGM's musical 1939 adaptation of The Wizard of Oz has endured for generations. Raabe was one of the last surviving "The Munchkins" a group of little people actors who collectively hold a star on the Hollywood  walk of fame. The actor 4' 7" actor passed away from an apparent heart attack at the age of 94 . Since 1986 Raabe has lived at the Penney Retirement community in Penney Farms, Florida. He was a graduate of University of Wisconsin and  a veteran of World War II.

"As coroner, I must aver, I thoroughly examined her. And she’s not only merely dead, she’s really, most sincerely dead.” Meinhardt Raabe as the Coroner in The Wizard of Oz 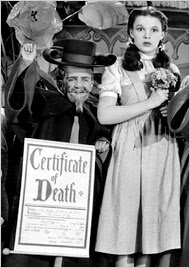 Raabe and a young Judy Garland
Posted by Andrew klaus-Vineyard at Sunday, April 11, 2010