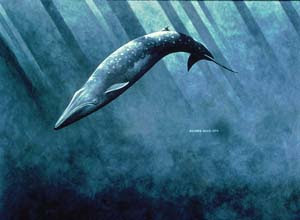 Überhip sushi spot Hump (located in the Santa Monica airport ??) owned by Typhoon Restaurant Inc. (which has two Typhoon Restaurants  in Portland Metro area) has been charged along with sushi chef Kiyoshiro Yamamoto, 45 for serving sei whale to customers upon special request (along with horse meat) . Sei whales are an endanger species and sale of their meat (like that of all marine mammals) is illegal in the United States. Whale is considered a delicacy in many asian nations where the controversial whaling industry still thrives despite international outrage.  CNN reports two women from the same team as this year's Oscar winning documentary The Cove, about Japan's controversial inhumane dolphin slaughter, went undercover to Hump . 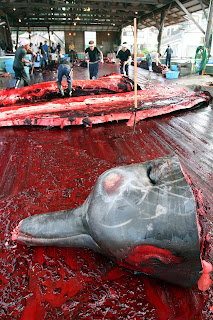 " Its Web site asks diners to surrender themselves to its chefs for "a culinary adventure ... unlike any that you have previously experienced."
Armed with a hidden camera, the two women captured the waitress serving them whale and horse meat and identifying them as such, a federal criminal complaint said. A receipt from the restaurant at the end of the meal identified their selection as "whale" and "horse" with the cost -- $85 -- written next to them."

Killing and eating endangered species for the thrill of the exotic and new is a disgusting human trait that should have been left behind centuries ago. It is barbaric and incomprehensible to me. I'm horrified by this having occurred and wonder where else in the US this happens, I'm saddened to think this is probably much more common than I'd like to believe.  I say we boycott all Typhoon Restaurant INC's subsidiaries. This is unacceptable. 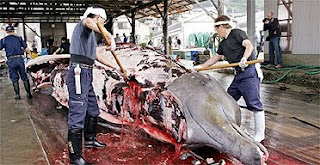