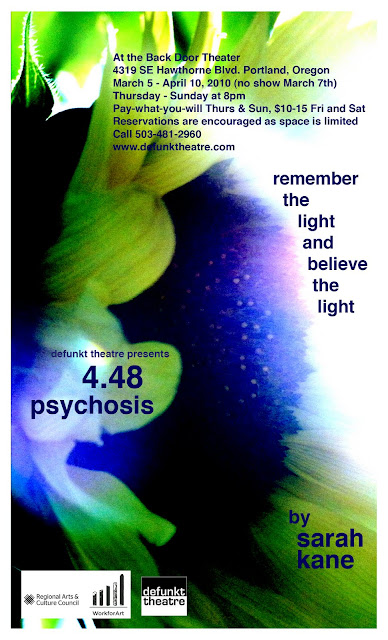 Sometime in 2001 looking for new theater works for possible productions iconoclast director Grace Carter was perusing the shelves at Powell's City of Books when she stumbled across the collected works of controversial British theater superstar Sarah Kane (1971-1999) . Randomly opening the book to a page covered in abstracted numbers (those numbers feature in 4.48 Psychosis- Sarah Kane's final play) Grace Carter was mesmerized .
In 2002 Carter directed Sarah Kane's "Phaedra's Love" and now returns to Kane's oeuvre for Kane's controversial swan song, 4.48 Psychosis.  Kane wrote the play as a dispatch from the outposts of sanity, depression and hopeless hope. I sat down with Grace Carter to discuss defunkt theater's stunning new performance of 4.48 Psychosis (starring an astounding trio of Christy Bigelow, Joel Harmon, Matthew Kern) and which opened (last night) March 5th 2010 to rave reviews. 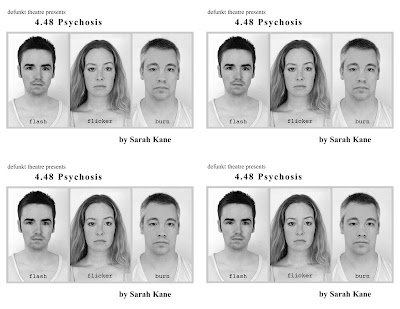 It's all augmented with minimalist and yet stunningly appropriate costumes by Drammy award winner Lori Sue Hoffman, Lighting design by Emily Stadulis and sounds by Richard E. Moore with additional music by Ron  Mason Gassaway and multimedia projections and video directed by Grace Carter with Portland art-star photographer Holly Andres as cinematographer. It is
truly THE must see performance event in the Pacific Northwest this year.
Check out more info and an exclusive interview with Grace Carter after the jump. 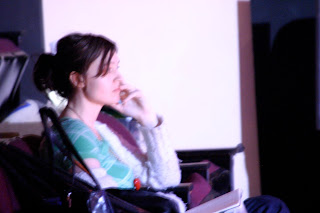 "pressure to live up to  Kane, being true to her vision, her writing style. It's so full, of meaning, and structured so well that there is room for interpretation and freedom, so they constantly evolve and subtle layers, it's exciting and brilliant as an artist it's absolutely a treat."

On fears of performing such controversial material:

"[I] don't know what the reception will be. You can't focus on that. [You] focus making the show as strong and true as possible, if you give a strong, honest and true performance [the] audiences gain. It'll stand on its own and I'm very happy and feel we made a bold statement and it's honest ad true to Sarah Kane's statements.

"Each brought a different facet to the piece. It's the great Chemistry of this trio and we knew that they/we would support each other, looking at how they work together; how connected and safe with each other. Christy Bigelow, when she auditioned she embodied all the layers and the levels with the issues and themes of the show, that span the spectrum in a  raw and heartfelt way. Joel is so lovely playing this dysfunctional guardian angel, he's extremely loving and has to play someone who is like the OCD psyche that gets stuck on the ugly truths and needs validation and to be loved constantly. Matthew is so brave how he addresses the doctor and the care giving aspects of her psyche. I really want to give a lot of credit to these actors.

On Mental Health Care and the role of the doctor/lover


"We really wanted to show a fallible human and representation of how she saw their relationship. It's honest and true to Sarah Kane's statements.We tried not to vilify him. He does care for her, just as she is, [he] laughs off her gallows humor, [he's]not afraid of her. As a Doctor he is caught -I care for this person on a human level but on a professional level, I can't."

4.48 Psychosis • By Sarah Kane
5 March through 10 April, 2010
Thursday - Sunday at 8pm
Call 503-481-2960 for ticket reservations
4.48 Psychosis is supported by a grant from RACC and Work for Art
At 4:48 when sanity visits for one hour and twelve minutes I am in my right mind.
defunkt theatre is proud to present Sarah Kane's 4:48 Psychosis, a riveting and unflinching journey into the human mind at its darkest hour. Set in undefined locations, Kane's script contains no stage directions or defined characters - blurring the line between reality and illusion, poetry and dialogue.
Like all of Kane's work, 4:48 Psychosis challenges conventional theatrical constructs and defies easy categorization; as The London Times put it "there's nothing else like it in the language." defunkt theatre company member Grace Carter directs.
At the Back Door Theater • 4319 SE Hawthorne Blvd. Portland, OR
Pay-what-you-will Thursday & Sunday, $10-15 Friday and Saturday
Reservations are encouraged as space is limited

{ Full disclosure-While in no way biased I am well aquatinted with many members of the defunct theater company, Matthew Kern has been a contributor for Diggin' To China in the past and is a collaborator (and Voice of  Becky Pickles) on the popular web series Sylvia!}
Posted by Andrew klaus-Vineyard at Saturday, March 06, 2010

Wow! What a cool interview/review/snapshot of the show! You captured some wonderful moments with the pictures and I love the structure of your interview. This makes me 3 times as excited to be a part of it as I was before reading it! ~Emily