A is for Accident - Songs About Lovers 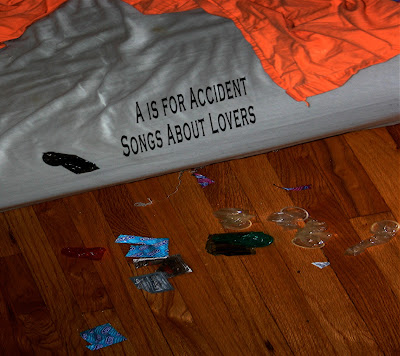 Next month my band A is for Accident will release our new pseudo- e.p. / minialbum  the 8 song set Songs About Lovers.   The album is in a way a departure from our debut Selfish and in it's own way a continuation of that cycle , but also closure to it swell. Due to unforeseen unavoidable medical issues A is for Accident seems to have lost co-writer and vocalist Jules Baird (hopefully for only the time being) . "Junipers", one of my favorite tracks from Selfish, featuring the amazing Beth M. Peterson resurfaces here slightly remixed, as does the outtake, very early track "Long Hallways". Speaking of early tracks "Bottom of the Well" has been kicking around in demo form since 2001a bollywood style dance number.  A mid-tempo electro re-envisioning of the jazz standard Jacques Brell/ Nina Simone classic "Ne Me Quitte Pas "
"An Ex is an Ex" marks the most striking departure into straight forward rock-n-roll territory for A is for Accident featuring  British ska/reggae influenced guitar and brass, but retaining the toxic wit reminiscent of the Magnetic Fields. "Le Fôret Noir" is a franglais rock number with a full orchestral strings and rocking bass lines.  "This Is Our Youth" features acoustic guitars tribal percussions and an African choir in a New Order meets Jesus and Mary Chain mashup that embraces A is for Accidents more World Music side to the fullest effect as well as a love of 60's garage rock. The album closes with the plaintive piano ballad "Briars (Language is Inadequate) " a painful pleading song of regret bringing the reflexive references to Selfish to fill closure. I have to admit "Briars" is one of my most private personal songs in a decade and I'm immensely proud of that simple song more some of the more elaborate , orchestrated numbers.  I also must credit to my amazing producer team Yves & Ys dans Paris for the constant encouragement to continue making music in the face of obscurity :)

Songs About Lovers by A is for Accident
Posted by Andrew klaus-Vineyard at Saturday, February 20, 2010