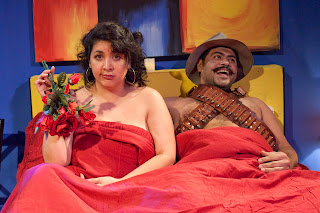 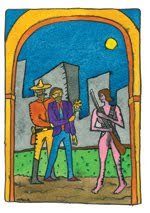 Sabina Berman's   Entre Villa Y Una Mujer Desnuda (Between Pancho Villa and  A Naked Woman) at Miracle Theater Group is a bawdy, poignant comedic exploration of the battle of the sexes from a decidedly Mexican perspective. The Machismo culture and reverence to outlaw hero Pancho Villa sets the back drop as a modern day romance unspools itself before our eyes.  A sexually charged relationship between Gina (a lovely and well cast Nurys Herrera), a single mother with an adult son studying abroad, and her lover Adrián (a delightful Enrique E. Andrade), an ineffectual intellectual  comes to agrinding halt when Gina demands something more than a quick roll in the hay, something as revolutionary and shocking as- a cup of tea and  conversation as foreplay.  The choreographed dance of the sexes takes on layers upon layers of allegorical significance as they struggle to determine who leads and who follows. When Gina decides to break free of the doomed affair with Adrián and start seeing a much younger lover Ismael, a doe-eyed youth (Alberto Romero) the spirit of of Pancho Villa (Vicente Guzmán-Orozco) begins offering advice to Adrián, to comic effect, on how to rule a woman. But as they say- The time times they are a changin'.

More after the jump 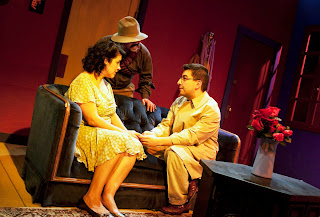 Photo by Russell Young ©
Presented in its original spanish with english supertitles projected above the action the award-winning*  Entre Villa Y Una Mujer Desnuda is a must see whether or not you are a native speaker of the language (disclosure-I am not a spanish speaker and I followed and loved the performance just fine).  I was lucky enough to catch the show before it opened properly  and aside from a final act technical snafu at the very end it was a fairly flawless performance, a true crowd pleaser from start to finish.