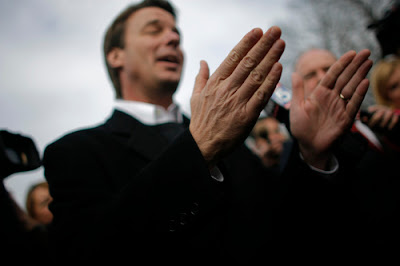 Do we care? Should we care? Even if he is "well endowed" as every blog -including this one- is now reporting. This is a guy who blocked funding to GSA and other queer youth programs in North Carolina schools, cheated on his wife (mother of his two young twins) as she battled terminal cancer with a documentary film maker and when the story broke denied he was the father of her child (now two years old), whom he now admits-oh yeah is his.

Apparently a former aide Andrew Young discovered the "shocking" footage including Edwards performing"several sex acts" on camera on a unmarked dvd at the home of Edwards former mistress. Young grew disillusioned by the lies Edwards spun and his abhorrent coverups and has penned a tell-all called The Politician.

sidenote- John Edwards is pseudonymous witha slang phrase in my home. Whenever some one is wildly inept and unqualified and is just fucking everything up with the little bit of power they have been granted, but think they are being super helpful we say " Oh, but they mean well-like John Edwards."
Posted by Andrew klaus-Vineyard at Monday, January 25, 2010

I can't believe John Edwards! To think I considered voting for him in the primary. I feel like after everything he put voters through we deserve to see the tape.