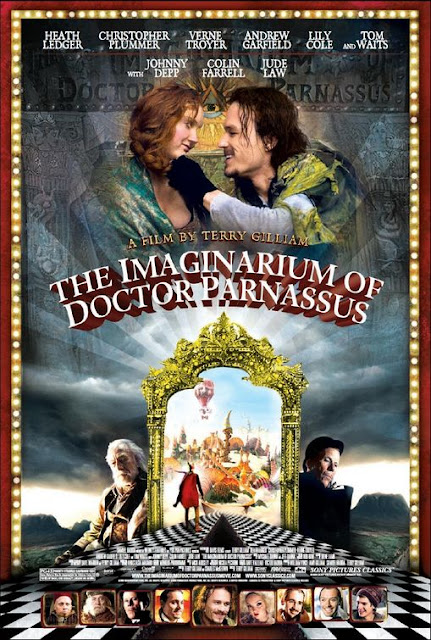 With The Imaginarium of Doctor Parnassus it seems special effects capabilities have finally caught up withe the perverse imagination of the wonderfully bizarre ex-patriot director Terry Gilliam (Brazil, 12 Monkeys, The Adventures of Baron Munchhausian) . His latest film in a bitter sweet triumph, a near masterpiece of convoluted plots, whimsical and frightening alternate universes, Faustian wagers, and above all else, love.  It also is the swan song for the late great Heath Ledger who's untimely death cast this film's future in doubt.  Enter Johnny Depp, Jude Law and Colin Farrell, these three actors stepped in for Ledger to play the role of "Tony" (a mysterious stranger saved my the traveling Imaginarium) in various  "imaginations", which oddly enough I feel despite it becoming a tragic necessity actually strengthened the film.  Christopher Plummer (give this man an Oscar™ already geez) stars as the titular Doctor Parnassus who is trying to outwit the Devil (the amazing Tom Waits who steals every scene he is in) in a faustian contest for souls to save his young daughter (Lily Cole, Rage)  from a rather unfortunate wager.  As Anton, a lovesick circus performer, Andrew Garfield turns out charismatic performance that often upstages Heath Ledger's dour amnesiac Tony. Verne Troyer (of Austin Powers fame) turns out a comic performance as a non-nonsense sidekick to Parnassus who does his best to help raise Lily and run the show.


more after the jump


Here's the thing, if you like Terry Gilliam you will love The Imaginarium of Doctor Parnassus, if you hate him, you will hate this. If you are a casual mainstream blockbuster fan  who is seeing this because you liked Heath Ledger in The Dark Knight, you probably won't know what to make, heads or tails of this film, but that's not the point with Gilliam's work. It is a work of imagination, where telling the story holds the universe together (literally in this one) and holds quite a few surprises for those who know where to look.