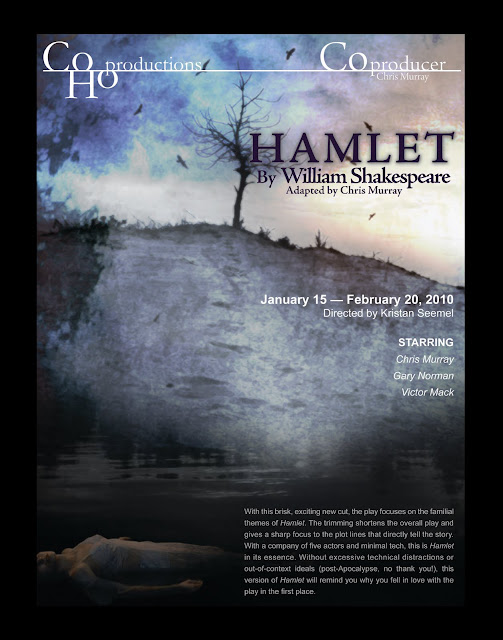 Full Disclosure: I was commissioned to create a video instillation/loop of footage to play in the lobby at CoHo Productions that plays before this production of Hamlet, however this in no way influenced for the following review.

It's a daunting task to adapt any Shakespeare play, especially one so profoundly iconic as Hamlet.  Not to sound cliched but it truly is a "To be or not to be" question.  Thankfully actor Chris Murray (who has adapted a parsed down Hamlet for a cast of five accomplished actors including himself in the title role, the luminously talented Valerie Stevens ) knows more what not to be than always perhaps what to be. This stark production of Hamlet keeps the power of Shakespeare's vibrant language, and dials in the focus, jettisoning the historical backdrop of invasions and war , to center the familial drama that is the core of this tragic tale of revenge (and possible madness) .  In it's bare bones form, with minimal tech CoHo's Hamlet, when it hits it's stride, is a passionate, angry beast.   The multiple double and triple casting works well allowing the actors a chance to stretch their muscles in a fairly fast paced turn and allows for moments of humor like the absolutely no bullshit gravediggers (Brittany Burch and Valerie Stevens) . Chris Murray understandably nurtured this production, adapting the script and starring as a surprisingly charismatic Prince of Denmark. It's a role every actor longs to play and he does so admirably well.  John Bredendzen's sound design is deeply unsettling creating the spectral presence of the former King Hamlet whom looms over his son tormenting him and driving him to revenge and madness. Director Kristan Seemel works against our preconceived notions of what this Shakespearian tragedy should look and feel like to a largely successful extent.

By no means a flawless production, there are a few ill advised costume choices and the layered set by "kollodi" is not forgiving for quick entrances and exits (of which there are a few too many) .  Those technical details aside I recommend seeing Hamlet because quite often we simply forget where so much of our common language comes from. So much of the play is so flawlessly powerful it benefits from this intimate staging as opposed to the traditional 30 plus ensemble casting.

In this day and age of reality television and internet streaming "seeing" Shakespeare is not as common as one might think. In fact, Hamlet, inarguably one of the most famous play in the english language is all but lost on the average person on the street.

Check out this clip for proof.


Hamlet is running until February 20 at CoHo Productions Click Here For Ticket information
Posted by Andrew klaus-Vineyard at Saturday, January 23, 2010