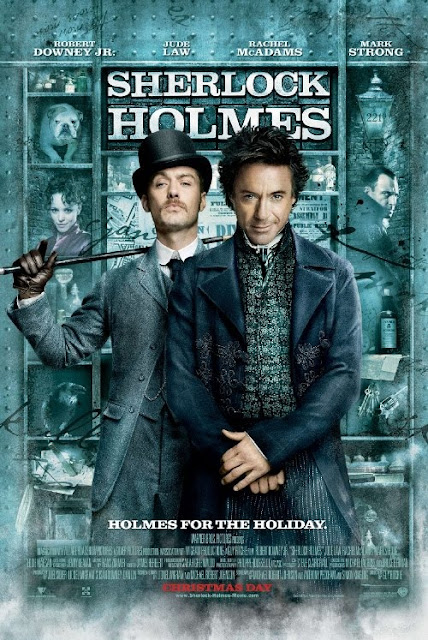 First off lets get this out of the way:  This is not your traditional BBC presents versions of Sir. Arthur Conan Doyle's beloved Sherlock Holmes. If you can not tolerate any deviation from that model, then by all means skip Guy Ritchie's new film Sherlock Holmes. However in doing so you will have missed one of the most explosively fun films of 2009.

True to the spirit of Sherlock Holmes, if not any particular text, director Guy Ritchie (Snatch, Lock Stock and Two Smoking Barrels, RocknRolla- Madonna's ex-husband) has crafted a violent, witty ride through a beautifully gritty Victorian London filled with corruption, cults, secret orders and crime.  Robert Downy Jr. dazzles with every bit of charm he possessed in the Oscar™winner Chaplin, (or displayed again in the unnecessarily great Iron Man)  Downy's wry take on Holmes is a barely functioning man in society only truly ail when "The game is afoot" so attuned are his sense that even sitting in a restaurant his observational prowess nearly over whelms him in one scene. Only one thing steadies him more than a case, only one thing are we lead to believe he can not live with out: Dr. Watson (a stunningly sexy Jude Law).


The game of wink-wink-nudge -nudge about the sexuality of Sherlock Holmes is nothing new to cinema (check out The Private life of Sherlock Holmes (1970 dr. Billy Wilder), for example-thanks Sarah!)
but here it's in over drive as Holmes must deal with a possibly supernatural case of Lord Blackwood's (a frightening Mark Strong) capture, execution and RETURN from the grave, the return of a former flame cat burglar and adventurer Irene Addler (Rachel McAdams), and most difficult and shocking, Watson's sudden engagement to  Mary Morstan (Kelly Reilly). Holmes purist know that Watson was married in the stories but his wife was eventually dropped virtually to never be mentioned again by Doyle.
Law and Downy bicker like a married couple over everything from household chores and noisiness when the other is sleeping to the scientific method. It's quite funny and charming and while they both have women provided as romantic foils it's clear that at least at some point the two were more than just friends.  It's an interesting take for such a macho film. It's filled to the brim with explosions , bare knuckle brawls, broken bones and harrowing set pieces of destruction.  The dialogue is snappy and wry, very funny and at times quite touching. The film was one of the most "fun" films of 2009. It's digitally reconstructed London has been compared to the look and feel of the last two Harry potter films as if to insult Sherlock Holmes but on the contrary I agree, it has a similar blue winter look, which made those films more realistic and ads depth to this outing swell.  The film also clearly sets up a sequel with the  specter of Holmes' greatest nemesis floating about the periphery much of the film.  See it on the big screen and enjoy it for what it is...besides your screening of Avatar is most likely sold out.