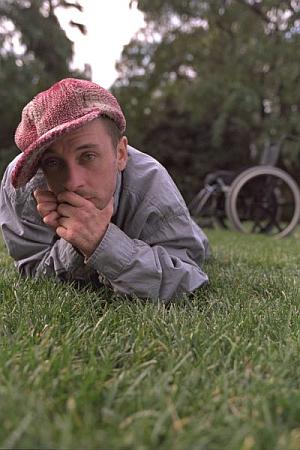 Brilliant folk-punk singer songwriter Vic Chesnutt has died. He was 45.  The musician who had been paralyzed since 1983 after a car accident and  battle a daughting array of medical bills, even being sued last year for more than $70,000 in related costs to surgeries he needed to live, but could not afford. In 1996 the Sweet Relief charity created an album of Vic Chesnutt's songs Sweet Relief II:  Gravity of the Situation covered by a collection of then-huge artists like Kristen Hersh, Live, R.E.M., Smashing Pumpkins, and Red Red Meat. Proceeds went to cover Vic's sizable medical debt and to provide insurance for other musicians who were in desperate need. The New York Times is reporting that Chesnutt overdosed earlier this week on muscle relaxers. He passed away on Christmas Day.
Vic was hugely influential songwriter (and fellow Georgian like myself!) He will be deeply missed by everyone who had the chance to hear his dark and powerfully emotional music.

I don't want this to turning a Health Care Reform debate, but I feel very strongly that his early death may well have been avoided.

Watch Vic perform a solo acoustic rendition of my favorite of his songs "Supernatural" after the jump.

This is incredibly sad. I loved Vic Chesnutt...the Athens music scene was a substantial part of my carefree youth.

Second, health care reform is a sham and many will fall through the cracks--as he did--while additionally having to pay for a service they can't afford.