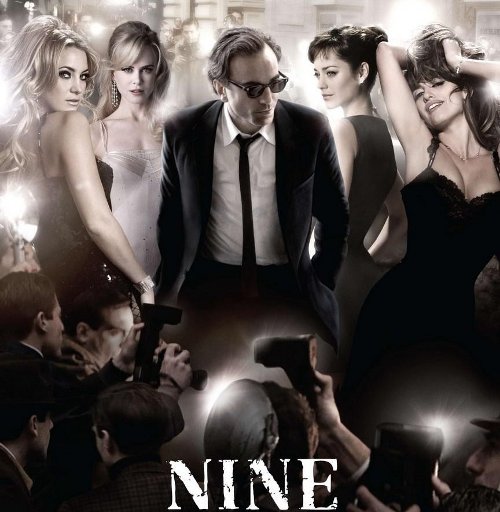 Nine, for those who do not know is a film adaptation of the stage musical of the same name, based on the life of Federico Fellini making his cinematic masterpiece 8 1/2 .


Director Rob Marshall seems a bit of a one trick pony here trying to recapture the lightening in a bottle that was his magnificent film version of Chicago. He sets all the musical numbers in his character's heads on a stage in the Italian movie studio (much like his device in Chicago) except here some of the songs are nearly tuneless. No Kander and Ebb classics here.   Infact nearly everyone has an oscar here: Daniel Day-Lewis (as the libidinous director Guido Contini) Nicole Kidman (playing his actress muse) Marion Cotilard (his aforementioned wife) Penelope Cruz (his married mistress) Judi Dench (as his darkly humorous french costume designer) Sophia Loren (as his mother) with Oscar nominee Kate Hudson (as a reprter/admirer) and Grammy winner Fergie (as his first crush, a beach dwelling prostitute-who steals the show) While the film is jam packed with these marvelous actors all of who seem to try their best, the film is so sloppily edited and whipfast that hardly anyone has time to shine.

Those that do are Marion Cotillard (Love Me, if You DAre; La Vie En Rose; Public Enemies) as "Guido's" long suffering wife and the always stunning Penelope Cruz as his long suffering mistress. Fergie belts out the show stopper "Be Italian" with such force you think fate a bit of a lull that the film has finally found its way under all that frenetic spinning but no, the film is as frustrating and punch drunk as can be through out. It's a shame because it come s close to greatness several times, the aforementioned "be Italian" and Cotillard's performance is heartbreaking and riveting but there is  a central deficit here, a shocking realization overcomes you that the always brilliant Daniel Day-Lewis is horribly miscast. Why hire an Irishman to play the MOST iconically Italian of Italian directors? NO, NO, NO. Same goes to Judi Dench- slightly miscast when she should have been a Parisian but she comes off MUCH better than Day-Lewis. I'll give Daniel Day Lewis credit for the physicality he brings, the expertly studied mannerisms, movements they are musical in themselves, but his singing voice, is so-so at best, his Italian accent- struggling. Nine was a big disappointment to the studios and at the box office this opening holiday weekend, but despite all my criticism of the film I do feel the film is worth seeing, there are as many great moments as weak ones. Making Nine a good film, when it should have been a great film.

Rob Marshall is set to follow up Nine with Pirates of the Caribbean : On Stranger Tides

You forgot to mention how FUCKING RANDOM AND POINTLESS Kate Hudson's solo is. I mean she dances well but WHAT THE FUCK WAS THAT ABOUT?!?! HOW DOES THAT FIT IN WITH ANYTHING?????

I like Marion's and Penelope's performances as well. If they released a 3-hour director's cut version on DVD with some more story, do you think it would be any better? Am I dumb to still believe in Rob?