I love you, Buffy Sainte-Marie 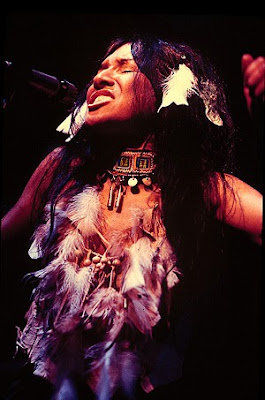 Buffy Sainte-Marie is ridiculous. I mean how much cooler can one person be really? The Native American singer-songwriter-activist sounds like the mash-up of Tina Turner, Dolly Pardon and Yoko Ono and has influenced countless masses of musicians for the last 47 years... She has a Golden Globe and an Oscar (for penning Up where we belong from An Officer and a Gentleman in 1982)  She's a feminist , a radical, an iconoclastic legend, and oh eh- She knows Big Bird.
Yup. If all the other cool points were not enough she was a resident on the best street in the world Sesame Street from 1976 to 1981. Just a few years after being arrested and treated like a terrorist for protesting the Vietnam War and for Native American Rights she was suddenly Big Bird's best friend. And when she gave birth to her son Cody she taught us all about being  friends, making room for new babies and breastfeeding(?!) Just two weeks ago a woman was arrested for discreetly breastfeeding  her child in a Target store, but in the magical hopeful 1970s, before Trickle-Down Reaganomics and the dumbing of America, Buffy Sainte-Marie breastfed Cody on tv, on Sesame Street... Where did we go wrong?


Check her out singing the single from her first new album in 13 years Running For The Drum (appleseed 2008) The album is a stellar mix of club beats, pow wow, love songs, rockabilly, and  protest songs. AMAZING and ass kicking at 68 years old.

After the jump check out some vintage Buffy on Sesame Street brilliance where she deals with a supremely jealous Big Bird as well as the (now) controversial (totally lovely and sweet) breast feeding clip.