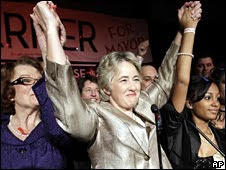 Thankfully there is progress in this country- and in the unlikeliest of places, Texas (?!)
Congrats to Annise Parker who took home a whopping 53% of the vote to become the Mayor of Houston, Texas, who just happens to be a out lesbian, and who sexuality played little role in the  campaign for election. Turns out when times are tough the economy matters more than who sleeps with who. Houston, TX joins, Providence, RI and Portland , OR (hey Sam!) as cities with openly gay mayors.
Posted by Andrew klaus-Vineyard at Sunday, December 13, 2009