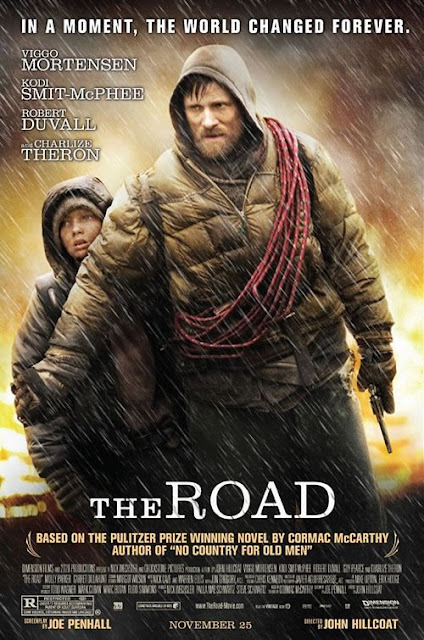 The Road directed by John Hillcoat ( the excellent Aussie western the Proposition) has survived a long and winding road of it's own making it finally to the big screen having had it's release date changed no fewer than four times, which is rarely a good sign. Based on the Pulitzer Prize winning novel my Cormac McCarthy (No Country for Old Men, the Border trilogy) and starring the always reliably amazing Viggo Mortensen. Mortenson stars as a single dad on a journey south towards the coastline with his ten year old son (solid newcomer Kodi Smit-McPhee) in an world ravaged by some unseen unexplained event. Civilization is no more and the few stragglers left are either starving or have become redneck cannibals, killing and eating the weak. This is not to compare the film to Road Warrior of Neil Marshall's underrated Doomsday. It's presented matter of faculty, in graphic detail and very literally with absolutely stunning production design and costuming-and there in lies the problem with The Road. It is perhaps too literal. When discussions turn to the prospect of a world without man, and the umpteenth "Keeping the fire alive" speech you become keenly aware of where this tale will end. Charlize Theron  (in flash backs) has the thankless task of being cast as "The Boy"'s mother, pregnant at the time of the cataclysm she gives birth in a ashen burned out America devoid of humanity.  She understandably begins to deteriorate as the world crumbles choosing suicide over survival. Survival is not the same as Living. The Road works best as a high brow well intentioned horror film, in those moments it shines as a truly horrific horror film for adults.


It's the film's denouement, it's final two minutes that everything falls apart and becomes insultingly bad.

The Road has many amazing elements that make it worth seeing including uniformly excellent acting, the aforementioned production design, the desolate wilderness (Shot on location in Oregon, Washington)is breathtaking to behold and the score works-liek the rest of The Road-in places. Nick Cave (who wrote the screenplay for John Hillcoat's gritty and violent film The Proposition) and Warren Ellis contribute a score that in its percussive terror is engaging and electrifying but the somber piano motifs through out referencing literal scenes of pianos are schmaltzy and misguided at best,  at their worst simply lazy. Especially coming from such formidably talented musicians. It's by no means a bad film, simply not a great film which it feels it well could have been, but the lack of the philosophical and psychological depth weigh down the film. It's simply too literal. Too focused on the details.  Like so many of  The Road's terrifying rural locations, you can't see the forest for the trees.