(more) Adam Lambert : CBS smug, but not so bright. 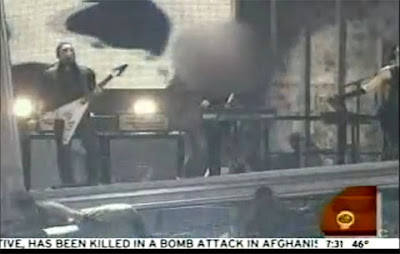 CBS smugly had Adam Lambert on and while discussing the controversy surrounding Sunday night's American Music Awards performance they chastised ABC for canceling his Good Morning America performance.  that would be great except for fully illustrating the point Adam Lambert was making about the double standard and homophobia in America when it comes to gay MALE sexuality. They showed his kiss from the AMA's (above) blurred out-apparently too offensive to show again- then with in seconds showed Britney spears and Madonna's famous (and dull) VMA liplock uncensored.
Not so bright are we CBS?

This kind of thing really annoys me. But I love how had the CBS reporter is working to get Adam to repent for his "sins" and apologize to "the children"  He responds with a brilliant "I'm not a babysitter"


Who the hell is letting their children set up till 11 on a school night to watch the AMA's anyway? To me that's more questionable parenting than letting them see two men briefly kiss.


(update) CBS issued this statement about the choice to blur Lambert's man-on-man barely more than a peck and not censor the Madonna-Britney french kiss:

“We gave this some real thought. The Madonna image is very familiar and has appeared countless times including many times on morning television. The Adam Lambert image is a subject of great current controversy, has not been nearly as widely disseminated, and for all we know, may still lead to legal consequences.”