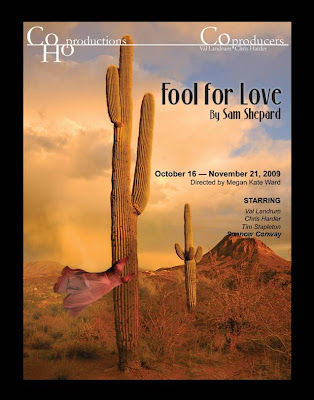 Sam Shepard’s Fool for Love is a biting slice of one night in hell, in this case a crappy motel in the Mojave desert. May (Val Ludlum)and Eddie (Chris Harder) have reconnected, but most certainly not reconciled after some time apart and have immediately begun reopening old wounds and inflicting new ones while a Greek Chorus of one watches silently from the sideline. Toss in a jealous, possibly insane unseen female stalker referred to only as the Countess and Martin, a sympathetic and unlucky gentleman caller for May, who gets roped into the toxic tête à tête.

Director Mary Kate Ward steers the action from violent confrontation to shocking honesty and raw pathos in CoHo Theater’s production. Being a real life married couple, Landrum and Harder add a complex air of familiarity that comes to long time lovers. Harder gives an oddly comedic turn, at times pathetic and yet always disturbing. For her part as May it’s crystal clear why Val Landrum wanted this role, it’s a hell of a role and the whole play is one hell of a ride. The audience is trapped, fascinated staring at the raw pulsating wounded hearts of these two characters as they alternately seek to console and destroy each other’s happiness. 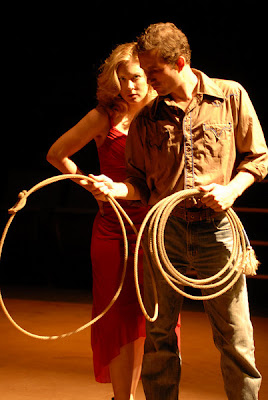 This destructive codependence is such a remarkable part of Sam Shepard’s work and his dialogue is razor sharp in its effectiveness as it induces winces of pain from the audience as these fighting on-again-off again lovers eviscerate each other.

As the insanity of the couple reaches one particular crescendo “the countess” expressed sole through gorgeous lighting and sound design sets them into a particularly violent outburst just in time for Spencer Conway’s entrance as a well-meaning local yokel looking for love-and clearly in the wrong place here. It’s a much-enjoyed lapse into toxic situational comedy as Martin, played by Conway is held semi hostage by the feuding former couple. The tequila flows and so does the darkest secrets as the night wears on. Conway is an interesting choice for the literal minded, almost virginal Martin as he is a character actor with the striking good looks of a matinee idol and poses an impressive figure on stage, towering over Harder by quite a few inches. It’s even more charming then when Martin is revealed the overly sensitive and compassionate foil to Eddie, but also lends a friendly ear to both Eddie and May. Rounding out this dysfunctional trio to a seriously dysfunctional quartet is as perfectly cast Tim Stapleton as a spectral figure commenting to May and Eddie from the sidelines and who’s vicious betrayal seems to have set this whole devastation into effect.

The technical challenges of such an intimate athletic production are apparent immediately in Fool For Love. A squalid motel room is unforgiving as a single location and the most is made of spatial limitations as doors are imagined, as are bathroom walls in bit of theatrical stagecraft. The set is perfect- the bed in particular is an excellent example of the death of the American West aesthetic Sam Shepard pedals so well. The headlights in the window, the glow of a fire all adds great realism to the production. It’s such attention to realism that makes the use of Tim Stapleton’s character slightly problematic. When these moments of supernatural theater magic occur with a simple light change it isn’t quite enough for this reviewer who wished this abstraction from the real had been pushed just a little further with either an alternate placement of the character to the action or a stronger color separation from the cast.

You may purchase tickets online here.