Before History, Beyond Imagination: Clash of the Titans. 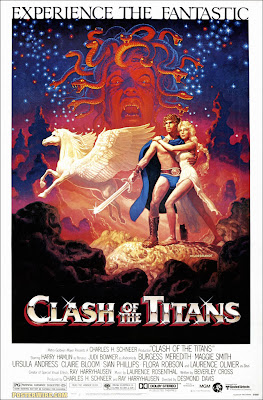 I've written about my love of stop-motion and Ray Harryhausen more than a few times here at Diggin' To China. One of the great trashy amazing adventure films that he created special effects for was 1981's Clash of the Titans, starring Harry Hamlin, Sir. Laurence Olivier, Dame Maggie Smith and the amazing Urselua Andress. It was a rollicking mythological adventure film that filled my mind with tales of Gods and Gorgons and a fair amount of bared skin. It was one of the films from my youth that made me become a film director today.
I could pretend it was something high brow like Cries and Whispers (which I love)- but really it was things like Clash of the Titans and Star Wars that planted that seed early on. I'm thankful for my parents fostering a love of fantasy films early on, my childhood was filled with Ra Harryhausen and Jim Henson. Inevitably a time would some when a studio would want to remake Clash of the Titans rather than even try to come up with a new film. I was horrified at first by the very thought of a remake, or re-imagining but I am trying to keep and open mind as there have been some that wether were commercially successful or not I thought were quite good/interesting (Charlie and the Chocolate Factory, Halloween, Psycho,The Manchurian Candidate) but others were unforgivable (The Fog, Texas Chainsaw Massacre, Sabrina, the proposed Butch Cassidy and the Sundance Kid project for Tom Cruise and John Travolta) . Well I just saw the teaser trailer for next year's remake of Clash of the Titans and while I'd still rather seen Harry Hamlin brought in to play Zeus instead of Liam Neesan (cause it would have been cheeky) I have to say I think the casting is solid and the film looks gorgeous, frightening and exciting- as it should. Maybe a bit of cribbing from Guillermo Del Toro on the designs for the Stygian Witches, but hey if you are gonna steal, steal from the best no?
Posted by Andrew klaus-Vineyard at Saturday, November 14, 2009

I'm a purist when it comes to movie remakes--originals just shouldn't be touched (with a few exceptions that is). I haven't changed my mind about Clash of the Titans. The 1981 version is the only one for me, even if it is more campy to watch now than then. The new version, based on the trailer, looks like what I wanted Beowulf to look like...British men with long, grubby hair battling it out with over-the-top monsters. Where's the curly haired Greek hero? And why do the good guys seem Roman? Why is there no color beyond dark? Greece has more white, blue, and green in its landscape than gray, black, and red. I'm really just confused about the whole design... oh, and what about the Perseus as a hopeful romantic? I will be surprised if that's included. Maybe it will be a great film, but probably it will be more like, just as I've said before, an Anglo-Saxon epic (which is great unless the plot is about Greek myth).