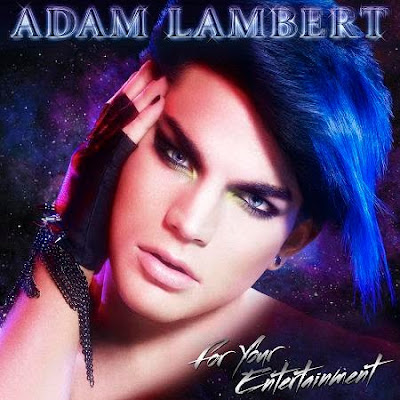 Adam Lambert's hotly anticipated debut album dropped today on the coattails of his "controversial" performance closing last nights American Music Awards. He shoved male dancer's faces into his crotch and kissed his androgynous male keyboardist...so what- he did it for the buzz as it was the closing number and he was well aware it's all people would talk about today. 1500 complaints (who complains?) were apparently called into the FCC. I might also add that this was the ONLY part of the AMA's I saw because I had something better to do- drink.

What I can say was coming on the heels of the contentious backbiting with Out Magazine calling him out for his seemingly anti-gay handlers and agents trying to straighten him, it was a damn good way to counter that charge as his performance was pretty homoerotic. however what people should be discussing today more so than was it vulgar or not was why the fuck was it so terrible!! ?? he was impossibly pitchy and off key the whole song, making wails and sticking out his tongue more than singing and while the song is somewhat catchy on the album it was just plain boring live, and double so called For Your Entertainment.


OF COURSE with the FCC shit storm ABC has yanked down the offending footage from youtube etc. but here's the song-far better than last nights's smutty train wreck. I do like he's defense of the brewing bitch fest of his apparently vulgar antics.


"There are a lot of double standards as far as that goes," the singer told the AP. "We've seen female pop and rock performers do that for the last 10 years. They've been very provocative, owning their power and sexuality. You just don't see men doing it very often. And I'm hoping to break down that double standard with this number."

But seriously the sound was atrocious from nearly ALL the performers last night so maybe it was the venue as mics cut off Jennifer Lopez fell down to get attention then demanded the fall be edited from the West Coast airing-which also cut Lambert's face-to -crotch action with the male dancers but not the grabbing the crotch of a female dancer...hmm.

OMFG the ONE TIME I missed something on television! I actually heard him toward the end of the song, but I didn't watch it, so I didn't see what was going on. I too thought he was pitchy and totally overshouted the song, so I'm glad you confirmed that. But now I sure wish I had seen the whole gay sex performance! GODDAMMIT!!! I never care for the kid but the performance sounds like a lot of fun.