Adam Lambert: For Your Entertainment- as long as it's not on ABC 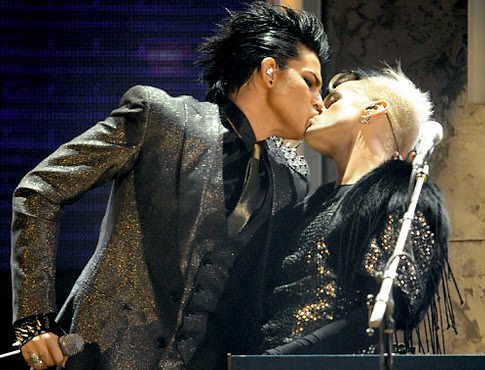 ABC  has pulled the plug on Adam Lambert performing  his single For Your Entertainment on Good Morning America citing complaints following his supposedly shocking American Music Award performance (which I've already written about here before) for fears of similar "offensive content" at such an early hour, offensive like kissing a dude on stage and grabbing his dancers lasciviously. Um Good Morning America recently pulled out all the stops to promote a "come-back" performance by a know crack cocaine addict and former singer Whitney Houston (which was legendarily disaterous-you must see it to believe how bad).  It's too bad because I'd like to hear the single live outside the shitty acoustics of the AMAs.  Here's the thing- I never set out to be a fan of Adam Lambert's I only saw a few episodes of American Idol and am only knew that he was gay and loud. But a fan of his won me over because of all people my DAD, my Jewish cowboy , big game hunter surfer dude dad loved him. He watched the show with my 12 year old step sister and was such a huge fan of him he won me over.
At least you can check out the video for the title track below. Expect a review of his album coming soon.  Embarrassing but true.