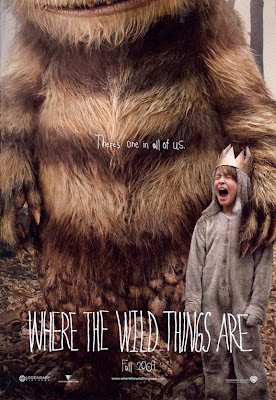 Maurice Sendak is a god of children's literature, not just in my humble opinion, but by and large he is seen as a genius. Where The Wild Things Are is unquestionably his masterpiece. It's enduring allure for more than forty years. Sendak's work hones in on the fury, confusion and isolation of childhood and explodes it with prismatic emotional ambiguity that resonate deeply in one's soul...whether they realize it at the time or not.
I've written a few times about Spike Jonez' LONG anticipated live-action adaptation of the acclaimed book (which consists of a mere ten sentences over twenty six gorgeously illustrated pages.) The film finally opened after much delay (it was shot on location in Southern Australia three years ago) and it was worth the wait. Jonez has crafted a masterpiece, a film that touches a deep chord with the emotional instability of childhood. It is a masterpiece of cinema ABOUT children, not necessarily FOR children (think Fanny and Alexander, not Monsters INC.). Kids will either be alternately scared, bored , or like many I have heard from-sad and crying. Now I do't actually think any of these things are bad for children. In fact I would have loved this film as a kid, but I wasn't exactly your average kid.
Max Records (son of photographer Shawn Records) stars as Max, a boy who is sent to his room without dinner for misbehaving where he creates an imaginary world where he sails off to an island of Wild Things to escape his anger only to grow lonely and calm down and eventually miss his mom and come home. That is the story in a nutshell, but the film is so much more. It's abstracted, unconventional narrative has bemused some, those used to being spoon fed plot by Hollywood films. This is an art film masquerading and marketed as a children's film shown in the multiplexes, a film where no one is quite sure who the audience is. Regardless of it's odd marketing it's finding audiences, topping the box office this weekend with over 35 million dollars.
The film is deeply moving and powerfully direct often without uttering a spoken word. Lance Accord's gorgeous cinematography shines here, grounding the stunningly rendered Wild Things , who were puppet-like suits with digitally enhanced faces , in the wilds of a real forest, beach, dessert ect. Karen O (of the Yeah Yeah Yeahs) and Carter Burwell provide completely mesmerizing organic music that enhance the film rather than seeming tossed in for marketing tie-in. In fact the music is so strong the Original Soundtrack is on my list for best records of 2009.
Where The Wild Things Are is pure magic, distilled perfectly, and even when it's few flaws show you don't care, because it feels real, real in unexpected ways. The audience at the screening I attended was nearly all adults-all of whom were crying openly. You can't have a good life with out shedding a few tears though.