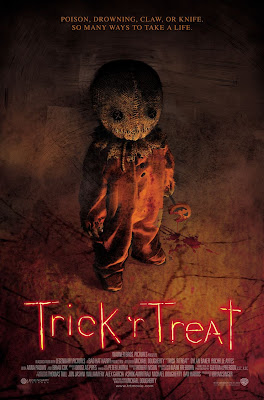 hmmm We seem to have a theme running. Shot three years ago-long delayed then picked up by Legendary Pictures (who have made some of my favorite difficult to market films 300, Watchman, Where The Wild Things Are) but the sadly dumped on DVD rather than given it's theatrical release as it so justly deserved.
Trick R Treat is one of THE BEST FILMS YOU HAVEN'T SEEN!
An anthology film weaving four narratives all taking place in the same town on the same Halloween night and loosely connected by the occasional appearance of Sam (Samhain-get it?He's the adorable little guy on the poster above) . It's more in the vein of Tales from the Darkside or Creepshow than your typical HAlloween season slasher movie, with great acting from veteran character actors (Dylan Baker, Brian Cox Oscar Winner Anna Paquin) and a whip smart script beautiful cinematography and editing..oh maybe that was the problem- people aren't accustom to GOOD horror movies anymore. And while it's not too gory I must say kids are not safe in the film, breaking a long standing you -don't -kill-a kid rule in many horror films.
The film is alternately scary, occasionally disturbing and always fun. Even when things turn horrific and violent there is a real sense of dark humor to the proceedings. It's the best Halloween film I have seen since John Carpenter's original seasonal slasher-genre creator Halloween. there is a real reverence for the season and all the trapping feel exactly right and well crafted in the film. I also enjoyed the dozens of in-jokes and references to other classic films with many allusions to Carpenter's film.I can't write an in depth review because the twists and turns are too good to give away and the film's nonlinear structure plays like an evil Pulp Fiction. It's fast it's frightening and fun. We screamed out loud a few times (okay that was me) and laughed a lot.
SEE IT NOW!