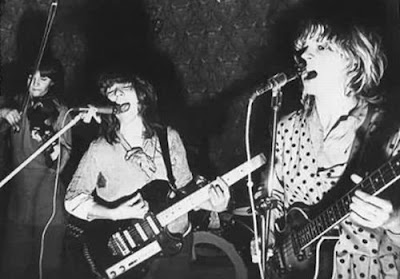 The legendary, influential all girl post-punk icons The Raincoats are playing F-O-U-R shows in the United States of America: New York, Los Angeles, San Francisco and Portland (and I have tickets OCTOBER 13th!!!!!). I remember just a few months back writing about their show at the National Portrait Gallery in Great Britain. I desperately wanted to see them play, but was certain that the once in a lifetime chance was simply not in the cards for me, I was shooting a documentary and am based in Portland, OR and they were playing in London.
Voilá! Problem solved!
Thank yous to Jon for the heads up on their super exclusive rare performance and to Jon's dashing husband Paul for picking up the tickets while I was out shopping for storage containers at IKEA and unable to get there. The boys at Gaycondo rock!
Side note my husband Taylor totally kicked our kitchen cabinet's ass and it's all super organized. This is getting too livejournal-y for Digging to China, but after my recent bout with H1N1 (Swine Flu) I'm stoke to rejoin the living in such rarified fashion.
Posted by Andrew klaus-Vineyard at Friday, October 09, 2009