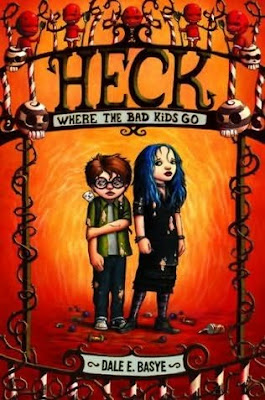 Author Dale Basye is scary smart and witty as hell, two things that make him perfect to write for the ever growing "Young Adult" market, kids books that parents swipe and read on their lunch breaks. Heck: Where Bad Kids Go caught my eye on a bookstore shelf, I read the opening sentence of the dustcover involving Milton and Marlo Fauster's deaths in a tragic Marshmallow Bear explosion... I stopped reading knew I had found something special and bought the book, AND a year later it's sequel Rapacia. Heck tells the tale of innocent boy Milton and his less than innocent sister Marlo in the afterlife of Heck, a limbo boarding school where bad kids go and classes such as ethics are taught by Richard Nixon and Home Economics by Lizzie Borden . While not for everyone (apparently) I'd highly recommend Heck for a clever slightly dark and twisted good time especially this Halloween season. Diggin' to China was lucky enough to sit down with the creator of Heck and chat about controversy, children's lit , monkeys versus robots, and more.

Your novels Heck and Rapacia are filled with high brow references and literary allusion next to low brow potty humor, which is a brilliant combo by the way- have there ever been cameos and in-jokes that were too obscure or too high brow to work in that you wished you could?

Dale Basye: Yes, perhaps too many to mention. Ayn Rand was going to make an appearance as the Chairperson of the Netherworld Soul Exchange in Rapacia, which made sense to me, but—in the end—it seemed far more compelling to have Mammon—the devil of covetousness employed by Dante—serve that role instead. Usually the teachers had more interactions with one another initially (I had a scene with Richard Nixon and Bea “Elsa” Bubb, the Principal of Darkness, in the teacher’s lounge in the first Heck book that I had to cut due to gratuitous Watergate references) and those scenes are usually trimmed. In general, whenever I have scenes that focus too heavily on adults, they are the first to go. Most of my favorite references make it in, though, such as Milton’s sign in the Cafeterium: “Milton’s Pair of Dice: Lost.” That’s perhaps my favorite. A bookseller from Hood River brought that up, but other than that, I don’t know if anybody picked that one up. There’s a TV show in the fourth Heck book, Fibble, that I’m currently working on called Wholly Shiite, that I just KNOW won’t make the cut! I’m learning that action is the key to keeping these books moving and many of my “ooh, isn’t that clever?”-isms just slow things down unless they serve the story. Still, I’ll find a way to wedge them into something else…I’m big on recycling, living in Portland and all.

Years ago (nearly ten) I worked at a bookstore and someone returned Alice Sebold’s The Lovely Bones as it offended her religious beliefs teachings of “heaven”Since your tales are set in a rather unconventional afterlife have you had any backlash from more conservative factions of the populous?

DB: Initially, when the first Heck book came out, there was a website in Texas called BeliefNet that lambasted the book. Of course, no one had read it, and they were literally judging the book by its cover. There have also been some appalling reviews on Amazon that my ever-rationalizing mind is desperate to chalk up to fundamentalism. I mean, if you go through the trouble of posting a long, one-star rant, clearly a button has been pushed. Recently, my publicist at Random House began booking my book tour and the aptly named Page at Barnes and Noble in Clackamas tried to book schools in her school district for appearances and was told that they would not have a book titled Heck in their school! Luckily the Beaverton School District was much more open-minded, especially just after Banned Book Week, and I had a great time visiting schools there. I find it startling when I encounter that rigid thinking. My opinion is that the Heck books, even if you find them in direct conflict with your religious views, invite discussion, which is the proper place for religious and spiritual exchanges, not a book (unless, of course, it’s THE book). It’s not like I’m really conjuring up anything new…I simply take all of the myths, references, and figures available and make a sort of kid-centric collage out of them. I mean, it’s not like I invented the notion of everlasting torment for sinful transactions (but man, if I did, I would have patented it and made billions!). Really: where DO bad kids fit in the Judeo-Christian system of things? If I were a fundamentalist parent, I would be delighted that my child was reading something that even mentioned such things…got them thinking about their spirituality. I would use it as an opportunity to help my child figure out his or her own personal beliefs. But there aren’t as many engaged parents as we really need in this world. I think it’s lame that parents think a book or movie or videogame should do the parenting for them. I also think the Heck books provide a wonderful opportunity to discuss obscure historical figures. I doubt if many kids today know who Nixon, Lizzy Borden, or the pirates Grace O’Malley were…but perhaps, after reading about them in Heck, they—perhaps with a little help from their parents—might nose around another book and learn more. In general, I was expecting a bit more controversy, actually. I even got Random House to print Heck and Rapacia in an environmentally friendly, clean-burning paper to help fundamentalist groups hold more responsible book burnings. 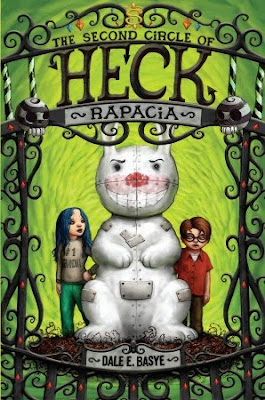 Why do you think Kids/Young Adult fiction has boomed as of late?

DB: Because being an adult sucks. So why wallow in it by rubbing your face in an adult book? I just think that you can approach so many more interesting, potentially controversial subjects in YA fiction these days, versus the ossified realm of adult fiction. It’s like the wild west, where anything and everything is possible because kids are so on the ball these days, eager to tackle difficult subjects and themes because they haven’t learned that they shouldn’t yet. The line is really blurry between YA and adult, which is a good thing because that’s how it is in real life. It’s just an exciting place to be. Young fiction plays a much more significant role in helping to form a reader’s foundation than adult fiction. The books that really meant something to me were almost all read as a teen or young adult. Much of the adult stuff I read lately just seems so pretentious and precious and self-serving, much more about the author than the story. But, then again, I don’t read much adult fiction these days anyhow. A macro view may be that, in the modern world, adults have less time to read overall, with technology taking hungry megabytes out of what little time they/we have. Children have a little more time, though not much, to devote to reading, and they do so voraciously.

Chose: Monkeys versus Robots? (Robot monkey cannot be your answer as I already called that)

DB: Without a doubt, robots: pneumatic grappling claws down. Robots are cool (I’m currently working on a robot book now, it just so happens) but it’s more to do with the fact that monkey creep me out. Seriously. I can’t make eye contact with them at the zoo: that imploring look they give you that seems to say “I’m just a few DNA strands away from you…you better watch your back or I’m liable to take a big chunk out of your bald back!” Monkeys are just wrong: scat-slinging, chattering simian chumps!

Do you have any writing rituals? Music that you listen too while you write?

DB: Before sitting down to write, I typically pour myself a sifter of Mendis brandy and sacrifice a small helpless animal to the writing gods. Actually, I used to surround myself with creepy surreal art (like Mark Ryden) and hunker down to work behind a hulking, imposing desk in the dark, blasting if-it-ain’t-Baroque-don’t-fix-it music. But I’ve discovered I’m not much of a method writer. There just isn’t any time. Plus, after hours of industrial and Goth music, I feel more like jumping off a bridge than making some kid on the other side of the page shoot chocolate milk out of his nose. Usually I just shuffle my music library, which is heavy on Brit Pop and ska at the moment. I can’t listen to overly wordy music (sorry Elvis Costello) or else I get derailed, and soundtrack music usually sends me to sleep, so I keep it eclectic…until Van Halen’s Panama pops up then I have to stop everything for an air guitar solo (which can be embarrassing as I often work in coffee shops). I try to listen to new music, but after a couple of tracks, I’m reminded of better, older bands that the currently hot band ripped off and I just go to the source.

You are a parent I understand. Has that changed your work ethic/way you work?

DB: Thank you for being so understanding about my status as a parent. Considering I haven’t been writing fiction for that long, my role as a parent hasn’t really been all that affected. Time is an issue since I prefer to be with my real son than make up pretend people in a book, but thankfully there’s this thing called “school” that usually gives me enough time to hammer something out during the day. I can’t really work at home when my son is around, since our house is just as smidgen larger than ones typically composed of gingerbread. Usually I go to one of several coffee shops that haven’t kicked me out and work until I get the sense that I must leave. Usually one cup of coffee equals roughly two and a half hours of rent at a coffee shop, I’ve found. Anything more and you receive the surly look that only a hardened barista can deliver. I was laid off from my advertising job six months ago, so I have more flexibility (the yoga helps too). I still do a lot of corporate freelancing as this author thing doesn’t really pay the bills on its own. I can’t help but think that there’s a more efficient, more rewarding way of writing, but I haven’t found it yet. I used to try working at odd hours, but I just can’t handle it. If I work too late then my mind gets going and sleep is impossibility. Too early and it’s like trying to turn over a ’63 Thunderbird on a cold winter’s morning. Usually I have a few productive hours between 10 and 3, then I’m kind of burned out and do other things, like interpretive dance, panhandling, shrieking belligerent poems at passersby, and getting arrested.

Love the interview. I actually laughed out loud. I picked up Heck and Rapacia on your recommendation and loved them both. I think that the "Pair of dice: Lost" sign was one of the funniest thing in the book (I most definitely caught it). I agree that it's a sad state of affairs these days that books like these wouldn't be encouraged in local school districts. As a former Oregon City High School teacher - I most definitely would have jumped at the chance to not only encourage my students to read this book, but to have brought Mr. Basye to speak to us. What a local treasure! And how fun would it have been to teach this along side Paradise Lost with Seniors . . . wow! Can't wait to get back into a classroom and irritate some fundamentalists!