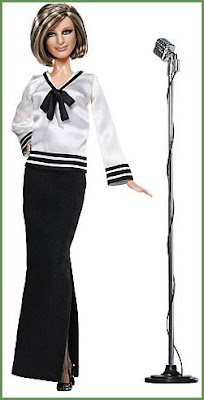 It wasn't enough enough for Bab's to release one of the best records of the year(Love is the Answer, her 63rd!! album), not enough to set a record for having a number one album in FIVE different decades, not enough to release digitally enhanced concerts,not even enough to subject us to Jeff Bridges "You're a sexy Girl"-no no- hot Jason's hot mama done gone and got herself A DOLL! This is clearly on every gay man over 50's (ok and several in their 20's and 30's that I know) holiday wish list! Bab's had this to say:

"I worked on this doll very hard. The slit was in the back. [It] had to go on the side," she says. "Actually, the hair is a little too silver, the bow is a little short, but it's okay."

Mazel Tov Ms Brolin! This is a Mattel limited edition Barbie for $54.99 She also said this presumably with a straight face:

"I'm a detail person. It's interesting because that's a perfectionistic impulse, even though I say I really am not a perfectionist,It's inhuman to be perfect."