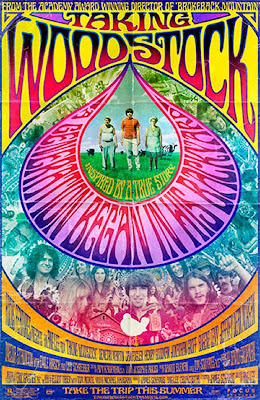 Taking Woodstock is the fluffy dramady from internationally renowned director Ang Lee (Crouching Tiger, Hidden Dragon; Brokeback Mountain; Lust, Caution; The Ice Storm) I adore his film as a general rule even being one of the rarified group who will defend is Marvel comic adaptation HULK (It had solid acting and great editing people! Just turn it off before the last ten minutes of esoteric hooey) in 2003 . So between french lessons and a writer's workshop I decided to grab some lunch and take in a matinee of Ang Lee's adaptation of Elliot Tibur's memoir of being the guy at the right place at the right time and in desperate need of something to jump start his inertia as he settled into caring for his able but co-dependent parents. Eugene Levy as THE Mr. Yager who's farm was the concert site, Liev Schrieber as a transexual bodyguard and Emile Hirsch as a hometown Vietnam vet provide much needed spunk throughout the film as it meandered through the growing chaos of organizing the even from the back room view. It's interesting that Lee chose to make a film about Woodstock that doesn't show any of the Concert itself. It's often heard off in the distance or glimpsed during a particularly well done acid trip sequence as the center of the ocean, the center of the universe. Imelda Staunton (Vera Drake, Harry Potter and the Order of the Phoenix) gives yet another great and under appreciated performance here as protagonist (comedian turned actor) Demetri Martin's irrepressible mother a character I loved and hated with equal venom. Sadly the film was not as profound and moving as much of Lee's work which feels like a missed opportunity as Elliot Tiber was such a deeply conflicted character. You have a semi-closeted gay Jewish man bringing the counter culture to rural American, and in the process saved his self and changed the world.
The film however is closer akin to The Wedding Banquet- slightly fluffy with some provocation tucked away throughout, however unlike The Wedding Banquet Lee is on top of his game and the film is masterfully directed and delightful to watch. You'll want a little more- but isn't that always the case when thinking about the summer you grew up?
Posted by Andrew klaus-Vineyard at Tuesday, September 29, 2009