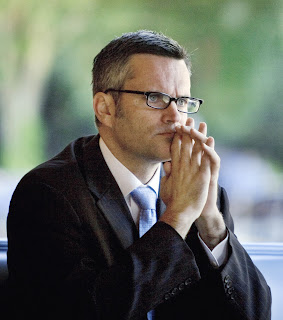 As Jasun Wurster's personal crusade against openly gay Portland Mayor Sam Adams crashes and burns around him someone in his camp has defected sending out info to those loyal to the mayor. I'm really disheartened we are still discussing this in the grips of such a desperate economic climate in Portland, seriously Jasun (and your followers) focus on where you put your own genitalia and your own hypocrisy, stop annoying us on the street outside the library when we are walking by, some of us have real things to do in the day that actually make a positive change in the lives of Oregonians. Here's an email forwarded to me via a group of Adams supporters. Take a gander.

Someone who wishes to remain anonymous sent me the following message:

Hi all,
From the Recall Sam Adams Site there is information that some local businesses that are collecting signatures for the Recall effort. As a STRONG supporter in local business, the best way to support a cause is to vote with your dollar. All supporters of Sam Adams are urged to NOT shop at business that support the Recall (they are listed below). There are plenty of other local business that can use your support, rather than ones that prefer to engage in a Recall effort that has nothing to do with politics, but rather our mayor's personal life.

If any business is listed but not accurately represented, please contact Jasun http://www.facebook.com/l/4db0d;at:http://www.citizenrecall.org/joomla/

On September 2nd the Oregonian reported:

The campaign to recall Mayor Sam Adams now has 34 days and some change to go to collect 50,000 signatures.

An updated figure on signatures should be ready by the middle of the month, he said. The deadline to submit more than 32,000 valid signatures is Oct. 5. Wurster said the campaign won't submit the signatures -- making the sheets public -- if he doesn't think the recall will qualify.

I stand by Sam Adams.

We're with Sam too! Some people are confusing Queen of Cups Spiritual Apothecary (us) with Queen of Hearts.

For me the most disheartening components of this campaign has been the disinformation from those who support Adams. Even more disturbing is the physical violence that Adams supporters have inflicted against our volunteers.

Though I do think holding politicians accountable is one of the most positive changes we as Oregonians can do.

Oh-yea, the list of businesses the Elliot Young sent out on the Support Sam Adams facebook group... has always been on the front page of our website (www.RecallSamAdams.com).