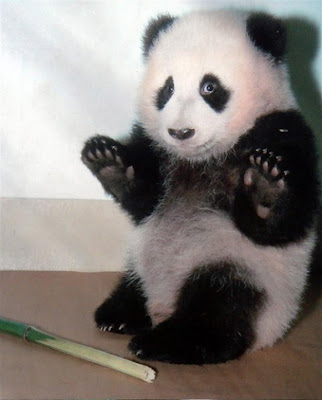 Chris Packham, a British Conservationist wants to kill all pandas.
Okay well not exactly. He argues that they are an evolutionary cul-de-sac and we should stop spending millions of dollars on keeping them on the planet and we only do it because they are cute and that's not how things should be... hmm. like perhaps babies with treatable illness should left to die too , eh Chris? Poor Misguided probably well meaning mister Packham has earned himself the dubious distinction of joining the ranks of Pat Robertson, Lou Dobbs and Kanye West in the hall of shame- Oh Fuck You, Chris Packham.
Quote from Packham:
"Pandas are my frequent whipping boy. Here is a species that, of its own accord, has gone down an evolutionary cul-de-sac. It's not a strong species. Unfortunately, it's big and cute and a symbol of the World Wide Fund for Nature and we pour millions of pounds into panda conservation. I reckon we should pull the plug. Let them go, with a degree of dignity."
(Via Towleroad)
sidenote-doesn't the little panda above look so busted for midnight bamboo snacking
Posted by Andrew klaus-Vineyard at Thursday, September 24, 2009

Well of course we do it because they are cute (and mammals)!!! No one gives a shit about fish, or bugs, or plants that are almost extinct...because we humans generally don't empathize with them. Tigers, pandas, snow leopards, etc. are totally "awww"-dorable and, thus, they get our attention. However, this does not mean that they (cute mammals) don't deserve our help and our support. I don't think that anyone should give up on any type of animal, endangered or not. If anything we should extend our awareness to other species and life as equally deserving of human respect--not in the context of having to choose which species to favor. Long story short...Packham is an ass.


Oh, and that Panda is totally busted!!!

that's not species-ist either... we should respect all animals and the environment in our actions, but it is not our rsponsability to save them all....