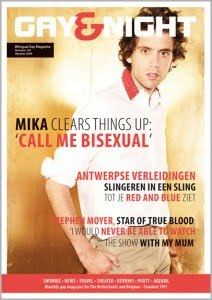 Mika, Lebanese/French -British reared pop star has come out as Bisexual according to a new interview in Gay and Night. Mika has sparked speculation about his sexuality since his first single "Grace Kelly" from his debut album Life in Cartoon Motion. His vocal's have been compared to Freddie Mercury and George Michael and his positive pop message is quite in opposition of many darker male singer songwriters working today. His new hotly anticipated new album The Boy Who Knew Too Much was released today! Expect a full review soon!
Posted by Andrew klaus-Vineyard at Tuesday, September 22, 2009

Email ThisBlogThis!Share to TwitterShare to FacebookShare to Pinterest
Labels: bisexual, gay rights, Mika, music review, pop, pop culture, queer music, the Boy who knew too Much, We are Golden