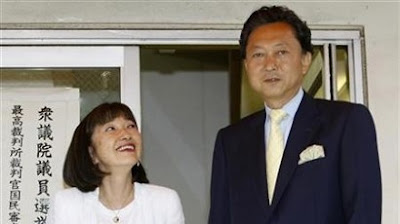 God bless the eccentric, cult of personality celebs of the world.
For one they make my job-well - awesome. They add vivre and colour to the sociopolitical discourse of pop culture, and now apparently, they are first Lady of Japan. Miyuki Matoyama is wacky even by Japanese standards, which if you know anything about such maters, is really fucking impressive.
She claims to have been taken to Venus abroad a UFO.

“While my body was sleeping, I think my spirit flew on a triangular-shaped UFO to Venus,” she said. “It was an extremely beautiful place and was very green.” Her first husband suggested that it was probably just a dream – but Mr Hatoyama, she insisted, would not be so dismissive. “My current husband has a different way of thinking,” she said. “He would surely say, ‘Oh, that's great!’

She eats the sun

“Yum, yum, yum!” she said, placing the imaginary solar morsels in her mouth. “I get energy from it. My husband also does this.”

And had this to say about American "actor"/Scientology-whack job Tom Cruise:

“He was Japanese in his past life, and we were together so when I see him, I will say, ‘Hi. It’s been a long time . . .’, and he will immediately understand,” she said. “This film will change your values. I will win the Oscar for sure. About seven years ago, my husband Yukio said to me, ‘Yeah, yeah, that’s a nice dream . . .’, but these days, he encourages me and he sits at his computer translating the script into English even though he is tired after work.”

Okay so she's clearly whoopty, but I have to say if you are going to be, OWN IT! and she does. I sorta dig her. I mean she's all of the above and a television personality and super successful cookbook author! Love her! But that's also because she's not running a global superpower... unlike her loving husband who is clearly an enabler...

boo poor form for world leader who was cruelly nicknamed "the Alien" as a child dow to his protruding eyes.!